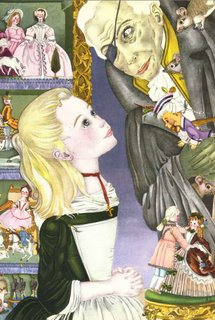 A picture for "Little Christmas"
or Epiphany:
Marie & Godfather Drosselmayer
& the Nutcracker,
an illustration by Adrienne Segur
for "The Nutcracker"
in The Snow Queen
and Other Stories.

Now that the Twelfth Night pageant and the Royal Feast have passed, I ought to get around to making resolutions. After that, I may send out my Christmas cards. Or wait until Valentine’s Day. Unless perhaps I put it off until next year. I’m not committing to a resolution on that one.

3. Get the new poetry ms. in order. That shambles in the office is reaching absurd heights (as, knee-deep on the floor and ditto if standing on my library table.)

4. Figure out what to do with all these stories and novellas that are lying about in drifts. At least stack the dratted things. Keep publishing them, but what about gathering some of them into collections?

5. Find more contemporary poetry that I like. I’ve gotten lots of pleasure out of Charles Causley and Kathleen Raine, and I was idiotic enough not to know their poems three years ago.

6. Don’t sit on a tuffet and wait for poetry requests in that annoying, lazy way. Send out some of those poky little envelopes with the SASE inside.

7. Think about whether to do and what to do about nonfiction requests.

8. Don’t say “yes” to too many things, and don’t blog about things that should be stories or poems. That wears them out.

9. Don’t bother with the other 1,998 resolutions as promised in the header. Nobody will read that far.

December was a fairly good month, with lots of requests. Requests for poems, requests for stories for magazines and anthologies, even an anthology request for a story based on the winning words from the national spelling bee. Alas, I realized that The Wolf Pit has gone out of print not only in the FSG hardcover but also in the Harcourt paperback. I had hoped that winning a national award would help it recover from the blow of arriving in this world mere days after 9-11, as well as in the choppy wake of FSG's The Corrections and my editor's departure. What does one do, these days, with an out-of-print novel? I frequently get requests for Catherwood, and that one has been out of print for years. Creative Commons license and free downloads? Re-publish with something like the Back-in-Print program? Sell subscriptions, the way Samuel Johnson did? The world of publishing has changed, and there are, oddly enough, options and choices.

Update, 11 January: The Wolf is not out of print! Mere rampant confusion and havoc of the mind in evidence! I take back some of the above...

Words from a Master Bookseller

From writer, reader, and bookseller Robert Grey: I always felt that the essence of being a great frontline bookseller was not selling people what everyone else was reading, but creating in-house bestsellers out of books few people had even heard of. That will also be my new mission at Fresh Eyes Now. Talented readers want to make their own discoveries, to feel "this book is my book." The non-blockbuster world appeals to them, as it has always appealed to me.

And some brand new news that just flew in

Though I was tickled to learn that the two FSG children's books were coming out from Firebird in paperback this year, I was also a little bemused that nobody had bought foreign rights. Now FSG has sold Chinese translation rights for Ingledove to Sharp Point Press. Google tells me that Sharp Point Press is not mainland China but Taiwan (Chinese complex characters).
Posted by Marly Youmans at 3:22 PM