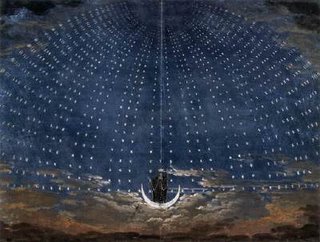 Those of us with neurologically-interesting families stick together. So happy birthday, Wolfgang Amadeus Mozart! He has been in my noggin of late, and, in fact, I wrote a poem about him that's about to come out . . . If you feel like exploring, NPR has a lot about him on its website at the moment: http://www.npr.org/templates/story/story.php?storyId=5164428. And you can play "musical dice" under the heading, "Mischievous Mozart." Here are some of my favorite quotes by and about Mozart, quarried from Wiki and elsewhere.

Pyotr Ilyich Tchaikovsky
"I find consolation and rest in Mozart's music, wherein he gives expression to that joy of life which was part of his sane and wholesome temperament."
"Mozart is the highest, the culminating point that beauty has attained in the sphere of music."
"Mozart is the musical Christ."

How wonderfully out of step with the age! Or is it? I think that beauty is returning to art after long exile, like the sea after a long absence--with a great rush and a dangerous pounce. And the joy of life: I think this is the thing that I value so much in the best writing: that unmistakable vigor and exuberance that makes black marks on the page live.

“Neither a lofty degree of intelligence nor imagination nor both together go to the making of genius. Love, love, love, that is the soul of genius.” --Wolfgang Amadeus Mozart

Mozart, child of wisdom: here is the deep pleasure of art, to be lost and reborn in creation, the soul at once destroyed and made anew and magnified. We have done our best to intellectualize the arts in the past century; we have tried to make art a workshop of intelligence and imagination. Often we haven't even bothered with the imagination . . . But Mozart, undeniably in the pantheon (and yes, there is still such a thing, despite all the inroads and brutal hackings of theoretical criticism and the fragmenting of literature and the arts into armed camps) of the greatest artists who have ever lived, finds genius to be located in the operations of love.

“I pay no attention whatever to anybody's praise or blame. I simply follow my own feelings." --attributed to Mozart

Charles Gounod
"Mozart, prodigal heaven gave thee everything, grace and strength, abundance and moderation, perfect equilibrium."
"Mozart exists, and will exist, eternally; divine Mozart - less a name, more a soul descending to us from the heavens, who appeared on this earth, stayed for a little over thirty years, and left it all the more rejuvenated, richer and happier for his appearance."

Karl Barth
"It may be that when the angels go about their task praising God, they play only Bach. I am sure, however, that when they are together en famille they play Mozart."

"As death, when we come to consider it closely, is the true goal of our existence, I have formed during the last few years such close relationships with this best and truest friend of mankind that death's image is not only no longer terrifying to me, but is indeed very soothing and consoling, and I thank my God for graciously granting me the opportunity. . . of learning that death is the key which unlocks the door to our true happiness. I never lie down at night without reflecting that--young as I am--I may not live to see another day. Yet no one of all my acquaintances could say that in company I am morose or disgruntled."
--from a Mozart letter to his dying father

Such words are interesting from one so young, and seldom heard in our own times, when we can expect to live long enough to forget about death and, when we think about it, dismiss the idea or pick up a magazine that promises that soon we will be virtually immortal, either through renewal of our very cells or through the uploading of our minds to machines.

Yet Mozart says, "Death is the key which unlocks the door to our true happiness." For this and other lines that express his faith that God will look on him with love and compassion, it is possible to discern a Mozart for whom the other world is just behind the door, the wall, the next room. The extreme sense of life one feels in his music is cojoined to a sense of death that has now, for most, drained away as modern and postmodern life has chugged onward, believing in its own progress. And yet his words suggest the idea that each is essential to the other, that Mozart's very abundance and gusto is linked to another realm.

"Mozart tapped the source from which all music flows, expressing himself with a spontaneity and refinement and breathtaking rightness." ~ Aaron Copland

Going to the fount is the aim of every real artist's journey. I love this quote from Copland because it yokes such opposites--"spontaneity and refinement" and makes me think of Wallace Stevens' praise of the finding of "rightnesses."

"Mozart is the greatest composer of all. Beethoven created his music, but the music of Mozart is of such purity and beauty that one feels he merely found it — that it has always existed as part of the inner beauty of the universe waiting to be revealed." ~ Albert Einstein

It is curious what sympathy Einstein had with artists, and here is a key--that the greatest art is a revealing of the mystery and beauty of the universe. Such a sensation is common enough with artists. The statue is only waiting to be revealed in the stone. The character appears whole. The story or song floods in. Einstein, then, is a sort of artist of the universe by being a revealer of its beauty.

"In Bach, Beethoven and Wagner we admire principally the depth and energy of the human mind; in Mozart, the divine instinct." ~ Edvard Grieg "Mozart's music is the mysterious language of a distant spiritual kingdom, whose marvelous accents echo in our inner being and arouse a higher, intensive life." ~ E.T.A. Hoffmann

E. T. A. Hoffman ought to know about distant kingdoms . . . Here he answers without shoddiness or an attempt to be "useful" something that boards of education are always wearily going over and turning into dolor and chalk dust: why should we 'have' art? What use is it? How much of a half-credit does it deserve, and how shall we assign it a proper grade? The "divine instinct" that Grieg finds in Mozart is the ability to fly directly to another realm of being, a "distant spiritual kingdom." Its "language," returned to our world with its boards of education and smart artists and glittery trash and a thousand another things, allows us to understand something we have not understood and to be more alive: to be more "intensive" in our living. This is a kind of answer that nonplusses politicians and school boards and those who worship at the altar of measurable credit and "use." It is a kind of analogy to the idea that the kingdom of heaven begins on earth: that even now, having heard the immortal language of another world in Mozart's singing, we can choose to expand and flower in a better and higher light.

Some other favorites: "Mozart has reached the boundary gate of music and leaped over it, leaving behind the old masters and moderns, and posterity itself." ~ A. Hyatt King "A light, bright, fine day this will remain throughout my whole life. As from afar, the magic notes of Mozart's music still gently haunts me." ~ Franz Schubert "A world that has produced a Mozart is a world worth saving. What a picture of a better world you have given us, Mozart!" ~ Franz Schubert "I listened to the pure crystalline notes of one of Mozart's concertos dropping at my feet like leaves from the trees" ~ Virgil Thomson. Leonard Bernstein: "Over it all hovers the greater spirit that is Mozart's — the spirit of compassion, of universal love, even of suffering — a spirit that knows no age, that belongs to all ages." There are buckets of both angelic and amusing praise for Mozart at Wikipedia, so go find your own favorites at http://en.wikiquote.org/wiki/Wolfgang_Amadeus_Mozart.
Posted by Marly Youmans at 1:22 PM