The Fool in his fish-skin cloak 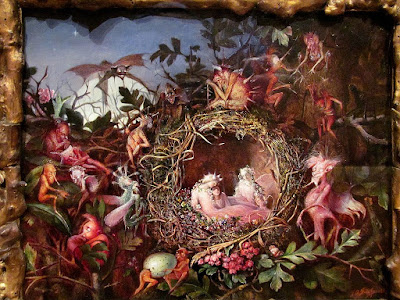 Today is a rainy ferrywoman day, so I leave you with a snip from The Book of the Red King, as I will be working on it when I return, and also a bit of the pleasantly obsessed fairy painter, John Anster Fitzgerald (courtesy of Wikimedia Commons), in honor of the brave snowdrops and crocuses in the yard. Perhaps it would be sweet to be so obsessed with fairies as John Anster Fitzgerald was, to flit to another realm where things like the Brussels attacks and the Lahore Easter bombings do not happen. But then, even in Faerie, the Queen must pay a tithe to hell, and she prefers her tithe to be human...

So here's a poem with a bit of fairy glamour, the subject being the Fool's beloved, Precious Wentletrap. This one was originally in Yew Journal, and was picked up by Shirl Sazynski for her future anthology, Persephone's Kiss.


Who is the Princess Wentletrap?

Is she a gleaming heaven-fish,
All splotched and straked with milky stars,
A trout that shatters pools with light?

Or is she only a spiral shell?

Listen. Closer. Glass bells shiver.
The sea is captured in a whorl.
The thimbled music of the spheres.

Is she a castle’s winding stair?

But can you follow, gyring up
To an observatory height?
Dance high-wire on the horns of moon?

Or is she threshed from lunar fields?

Is she the bounty of the dark?
See, stepping from the ruffled waves
Onto a strand of quartz and gold!

How the Fool dreams Precious Wentletrap . . .

Thinned-out aspen leaves and mica:
Nothing can be so lovely-frail
As her white hands, held up to light.

Why manifest to the King’s Fool?

He has the gift of fetching her.
He sings, wearing the fish-skin cloak
Under a crown of sparkling dust.

If you are interested in literature and criticism, read and enjoy or tussle with Joseph Epstein's new review, Where Have All the Critics Gone? Clip: Today the standard of highbrow culture has been worn away, almost to the point of threadbareness. For political reasons, universities no longer feel obligated to spread its gospel. Western culture—dead white males and all that—with its imperialist history has long been increasingly non grata in humanities departments. Everywhere pride of place has been given to the merely interesting—the study of gay and lesbian culture, of graphic novels and comic books, and more—over the deeply significant. Culture, as it is now understood in the university and elsewhere, is largely popular culture. That battle has, at least for now, been lost.

"Heaven have mercy on us all--Presbyterians and Pagans alike--for we are all somehow dreadful cracked about the head, and sadly need mending." --Melville, Moby Dick
Posted by Marly Youmans at 10:04 AM