next event
2-5 this Sunday at 114 Lake St., Cooperstown
Book signing and open studio with Ashley Norwood Cooper. Books (various of mine plus a little catalogue of the deployment series), monoprints, paintings from this series and the prior cut-away houses series, beaujolais nouveau and wine and goodies till everything runs out!

favorite Glimmerglass review of the week (from Amazon, by a novelist)
***** Beautiful Inside and Out By G. S. Thompson on December 2, 2014 Format: Hardcover This novel is beautiful inside and out. The story feels like a modern fairy tale with writing that dances on the pages in a way that can only be created by a spectacular writer. If you read this book you will know that Youmans is one of the most gifted writers living among us today.If you enjoy the twisting and building of words you will love this author's beautiful writing. If it can be called writing, because it seems more like she's pulling the whispers of angels down from a place we haven't been to yet and gently placing them on paper. Here's another suggestion: Get two copies of this book because you'll want to share it, but you'll be reluctant to ever let your copy go.

picture at upper right
That's Ashley Cooper's rather odd pooch, Peach, who has shoved his head into a number of her paintings--one Christmas Eve, he wolfed down a bag of chocolate-covered espresso beans that were under the tree, and then spent the night running from the house to Otsego Lake aka Glimmerglass like an insane boomerang that simply can't quit.

new page for Glimmerglass
While I have a page on this site for Glimmerglass, I started one yesterday on Facebook as well, which you may find right here. The page is set on "public," so anyone may visit. 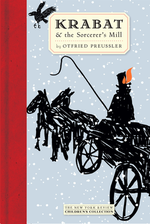 This year has been one in which I haven't read nearly as much as I would like, and have traveled more than I would wish for many reasons. But I just read Otfried Preussler's (1923-2013) delicious Krabat and the Sorceror's Mill (The New York Review Children's Collection.) Like all the best children's books, there's no upper age limit on the person who might like it. This tale of Krabat's imprisonment along with other boys and young Krabat and the Sorceror's Mill contains richness and mystery, and powers of friendship and love that battle--one kind of magic against another--against the darkness of the Master. Though I never read the book as a child, I experienced in reading it now that wonderful, light-drenched immersion in a story that happens so often for passionate readers in childhood. Here's a great tribute to the book from Chris Kubica, who did read the book as a boy (and who now lives in Chapel Hill, where I have moved and lived three times and thought that I would live for good, B. P. N.* His drawing is on the cover.)
men moves as quickly as time in the demonic mill. Bildungsroman and fairy story,

*Before polar North. You knew that, right?

the start of the story
It was between New Year's Day and Twelfth Night, and Krabat, who was fourteen at the time, had joined forces with two other Wendish beggar boys. Although His Most Serene Highness the Elector of Saxony had passed a law forbidding vagabonds to beg in His Most Serene Highness's lands (but luckily the justices and those in authority would often turn a blind eye), the boys were going from village to village in the country around Hoyerswerda, dressed as the Three Kings from the East. They wore straw crowns on top of their caps, and one of them, little Lobosch from Maukendorf, who was playing the part of the King of the Moors, blackened his face with soot every morning. He walked proudly at the head of the little procession, bearing the Star of Bethlehem, which Krabat had nailed to a stick.

remembered quote while thinking of Krabat
“I believe there is no part of our lives, our adult as well as child life, when we’re not fantasizing, but we prefer to relegate fantasy to children, as though it were some tomfoolery only fit for the immature minds of the young. Children do live in fantasy and reality; they move back and forth very easily in a way we no longer remember how to do.” -Maurice Sendak
Posted by Marly Youmans at 8:57 AM