Portrait of a poetry critic 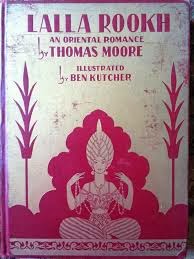 Last week I was noodling about in Thomas Moore's Lalla Rookh, a story in which a marriageable bit of property is carried off to meet Aliris, her bridegroom and king-to-be. In it, "Fadladeen, one of Lalla Rookh's entourage on the journey, assumes the role of ill-tempered critic of Feramorz's tales in the manner of the Tory critics of Blackwood's and the Edinburgh Review (this was the year before they lambasted young Keats for the faults of Endymion)" (wwnorton.com). Here Fadladeen reviews the poetry of the young poet Feramorz after the fourth narrative in verse...


FADLADEEN, at the conclusion of this light rhapsody, took occasion to sum up his opinion of the young Cashmerian's poetry, --of which, he trusted, they had that evening heard the last. Having recapitulated the epithets, "frivolous"-- "inharmonious"-- "nonsensical," he proceeded to say that, viewed in the most favorable light it resembled one of those Maldivian boats, to which the Princess had alluded in the relation of her dream, -- a slight, gilded thing, sent adrift without rudder or ballast, and with nothing but vapid sweets and faded flowers on board. The profusion, indeed, of flowers and birds, which this poet had ready on all occasions, --not to mention dews, gems, etc.-- was a most oppressive kind of opulence to his hearers; and had the unlucky effect of giving to his style all the glitter of the flower garden without its method, and all the flutter of the aviary without its song. In addition to this, he chose his subjects badly, and was always most inspired by the worst parts of them. The charms of paganism, the merits of rebellion, --these were the themes honored with his particular enthusiasm; and, in the poem just recited, one of his most palatable passages was in praise of that beverage of the Unfaithful, wine; --"being, perhaps," said he, relaxing into a smile, as conscious of his own character in the Haram on this point, "one of those bards, whose fancy owes all its illumination to the grape, like that painted porcelain, so curious and so rare, whose images are only visible when liquor is poured into it." Upon the whole, it was his opinion, from the specimens which they had heard, and which, he begged to say, were the most tiresome part of the journey, that-- whatever other merits this well-dressed young gentleman might possess-- poetry was by no means his proper avocation; "and indeed," concluded the critic, "from his fondness for flowers and for birds, I would venture to suggest that a florist or a bird-catcher is a much more suitable calling for him than a poet."

Want spoilers? As one might have predicted, Lalla Rookh falls for the poet on the long trip to her bridegroom, but hers is no tale of Tristan and Isolde. While she is cast down by her fate, "yet, when she rose in the morning, and her Ladies came around her, to assist in the adjustment of the bridal ornaments, they thought they had never seen her look half so beautiful. What she had lost of the bloom and radiancy of her charms was more than made up by that intellectual expression, that soul beaming forth from the eyes, which is worth all the rest of loveliness. When they had tinged her fingers with the Henna leaf, and placed upon her brow a small coronet of jewels, of the shape worn by the ancient Queens of Bucharia, they flung over her head the rose-colored bridal veil, and she proceeded to the barge that was to convey her across the lake; --first kissing, with a mournful look, the little amulet of cornelian, which her father at parting had hung about her neck." Lucky for Lalla Rookh, it turns out that Aliris has been slumming as a mere poet, entertaining her along the way with verse narratives, and getting acquainted with his bride-to-be.

So, indeed, Aliris has a more consuming vocation as king, although in a world (like our world, once, where courtiers could conduct combat with poetry and their sovereigns wrote poems) in which great power and the pursuit of poetry could be married. The entire poem and tale of romance with its interior recounted stories can be seen as a vehicle for skewering the poetry critic, who soon jettisons his criticisms (having been caught by a powerful bird-catcher) and sings a sweeter tune...
Posted by Marly Youmans at 6:32 AM