I woke up to brighter light—new snow—and thought about Andy Goldsworthy. I’m still wondering if those three stacked stones in the edge of the lake were his, a sort of private conversation with Otsego Lake and Kingfisher Tower, back when he was doing a project near Albany…  Perhaps it was simply homage to him, he being so near at the time.  He’s such an oddly Old Testament sort of figure, setting up cairns and stacked stone markers where he has had an encounter with the otherworldly this-worldly.  I am very glad he does it, though I am also glad that I make my cairns out of words.

My idea of Andy Goldsworthy is very appealing, the thought that he gets up early and works in the cold (being a Southerner, I do not want to go and do likewise!) in order to search for some kind of “rightness” and to make something that appears effortless.  It is a right goal of all art, to labor in order to create what seems tossed-off, effortless, or as natural as a leaf spiring from the darkness of earth.

Another thing I like about Goldsworthy is that he is not afraid to be silly and play, and that for him the whole world becomes the realm of art. For him, the landscape is always on the verge of revelation—it reveals itself in speaking water, stone, air, and fire. (Fire often appears when ice or particles or fur catch light, but it can also appear in transformed vegetable matter, as when a disk of earth-blackened leaves inside a sort of tequila sunrise of yellow-orange-red leaves shows that energy burned in a place as a bonfire does in a ring of stones.)

A great wheel of upbuilding and raveling never stops, and at its dark center one verges onto another world. It’s rather like the biblical injunction to “pray without ceasing”—that is, to make one’s entire life lit with the radiance of knowing God, knowing a greater life and being more alive. Art is always calling us to a larger life, to other worlds… 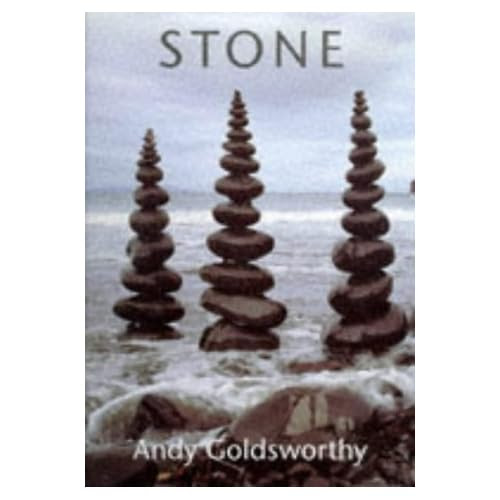 A large part of Andy Goldsworthy's art is to make one see this world with infant sight. That means that when, say, a great cairn of bleached driftwood (black-hearted, topped by a disk of darkness and absence) unwinds and floats apart as the sea comes in, we will see it drawn away as if into another plane, another reality—the work being a sort of nest of time raveled and invaded by eternity, a new sort of making rather than simple unmaking. The marriage of the dark center with the earthly driftwood limbs is seemingly dissolved yet encompasses more as it disintegrates, widening to hold the sea and vanishing as if into another realm—the sea accepts its gift.

So incense went up from sacrifice, sending up a wavering ladder of fragrance between one world and another.  Likewise Goldsworthy’s great upright circles of polar ice blocks or stone work work rather in the way pierced stone was said to allow fairy sight, transforming the eye and showing a new world, there all the time but unseen.