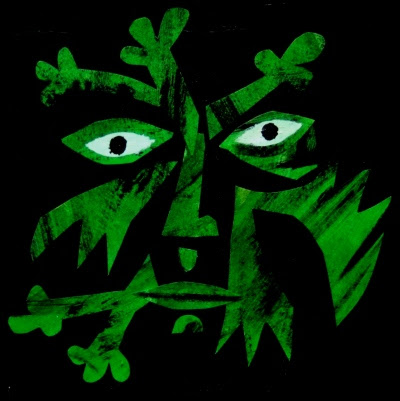 Green men can be dangerous. Once they open their mouths and the leaves erupt, watch out!

While sketching and painting and fooling with green man images for the cover of my upcoming book of poetry, The Foliate Head,  the painter Clive Hicks-Jenkins was overcome by the green spirit and cannot stop tossing off magical images... He appears to be inhabited by greenishness and can't stop.

He has gotten many interesting comments at the Artlog (as I have, too, here and on facebook and via email--thanks to those of you who sounded off!), and if you want to join in and give an opinion of the cover images, they are now in two spots. Six finalists were collected here: http://clivehicksjenkins.wordpress.com/2012/01/27/marlys-book-cover/. A further cover image went up today: http://clivehicksjenkins.wordpress.com/2012/01/29/green-men/, and he has started posting interior images. If you look at those two posts, you may refer to an image by the number under each.

If you commented somewhere before, feel free to comment again now that we have more... And if you have not commented, feel free to join in!
Posted by Marly Youmans at 3:19 PM