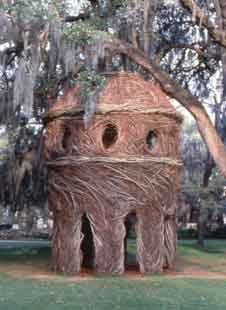 Sticks.
Favorite silly quote of the week
My children are 1/16th Akwesasne Mohawk, and so they have a special interest when Iroquois pop up in schoolwork.
The Daddy, asking study sheet questions: How did joining the Iroquois League help the Mohawks?
N, age 9: Better technology.
D: How’s that?
N: Sharper sticks.
***
The Akwesasne Mohawks did not join. They were fire-spirited Iroquois, once upon a time, and did not care for nation-building. But they liked sharp sticks.

More sticks.
One of my favorite North Carolina artists is the withie-man, Patrick Dougherty. Evidently he was inspired by the forests around Southern Pines, where he grew up. They strike me as very "sticky" places. I've seen some of his creations in Raleigh and Carrboro. I just had a pleasant little fantasy that he came to visit and made us a little castle and village in the backyard. Then there would be four castles in Cooperstown. If you don’t know his magic cities and withie gyres and leaning towers, go indulge your wanderlust. The picture is borrowed from his sticky site, www.stickwork.net/.


Sticks to come.
Next week the gigantic ash tree comes down. Sad for the ash, sad for the dratted old pocketbook. I’ll have to write a poem for the extravagant creature. Three times it dropped an enormous branch on the lawn, one filling up the entire back yard. A fourth time it speared a large branch through the driver’s side of the windshield, about thirty seconds after I paused at the back door, thinking the day a bit windy. Life is so full of near misses: I'm very glad not to have been an ash-tree's shish kabob. I’d like to make a Dougherty house out of its no-doubt astonishing remains, but I’m only 5’3” and have nary a stick of scaffolding.

By stick, by stone, I am surprised!
I have been elevated! Poet and web-dreamer Michael Burch (another Southerner, by the by) wrote me that I am now not only a “Spotlight” poet for the month but also one of the permanently “featured” poets on The HyperTexts. Thanks, Mike!