Palace Aphorisms nos. 66-88: in which I hog out on poetry 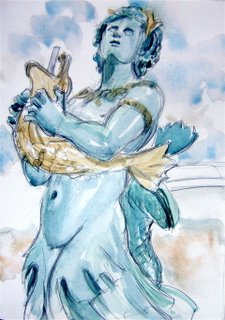 Whatever you are as a poet, that is the norm and the daily bread you eat—even for Shakespeare, even for Milton and Dante and Homer.

Aphorism no. 86, or the Classical Caddy Aphorism

Poetry is a muddy girl with leaves in her hair, shouting her betrayal from the dark side of the moon, and it is the scribble of blood taken by sand, next to the fallen hoplite: both these, neither, and more.

ILLUSTRATION CREDIT: Fountain detail, Place de la Concorde, by permission of Laura Murphy Frankstone and Laurelines. This is the final image from Laura's month of sketching in Paris.

The forgotten word that is nagging you—the one that you can’t quite remember and catch—one day a poem will restore it.

Time is crueler and more ruthless to bad poetry than to badness in any other form of art.

The source of power in poetry lies in the unsaid; the unsaid never lies.

No more little men’s little poems about the paper over morning coffee, depression, and a dog!

Aphorism no. 81: the Lee & After aphorism

The seeds of poems lie in the pockets of dead soldiers, watered by tears, and when spring finally comes the kernels swell and sprout and make the fields green.

Aphorism no. 80: the Corset

Aphorism no. 79: the Great Vacillation

The early poems of Yeats are lithe young girls, standing among roses, half obscured by leaf and petal—who will shelter them from the brutal, disastrous glory of the late poems?

Aphorism no. 78: the Emperor

Poets who never submit to formal verse are born naked like us but never wear clothes.

In the Golden Age of nanobot and microchip, one danger is that a poem may shrink but contain no worlds.

Is the poem too grand? Then go your way; the poet will bother you no more.

Aphorism no. 75, the Effortless

A seeming carelessness pleases in a poem, as of something tossed-off with grace.

The problem with many contemporaries called poets is that they practice a strict separation between body, soul, and mind.

A writer must emulate the growth of the universe, pushing forward into the void.

To read, rejoice in, and meet the soul of a writer—one meeting the other like a long-lost twin—is the gift of the reader.

If Shakespeare can die, then how can we help following his lead?

One of the three most important sensations in a writer’s life is the feeling of going to the pouring fount and fetching a pail brimming with water.

All these critical arguments over realism versus irrealism in poetry and prose simply ignore the fact that a writer can do anything, given sufficient fire.

As a poet, be a Jack or Jill who fetches the pail from the fount, even at the cost of crown and fallings-down.

Even the greatest poetry ends in silence.
Posted by Marly Youmans at 4:00 AM