Snowflakes in the hair: so very romantic, six months straight. Or seven, or eight. Fall swept by too quickly. The last colored leaves are a transparent, thin red that lets the sun right through.

Hard for a Southerner not to feel a tinge mournful by the fall's fifth or sixth light snow. This year I missed the yellow wood that materializes in Cooper Park. All those half-invisible trees become wholly visible in October. But this year the leaves were not so bright and fell early. I wished for the yellow wood; I wished for the bright yellow pools that lie around the trees on emerald grass. The weird autumn twilight this far north goes straight to the heart, a message one can't help reading. 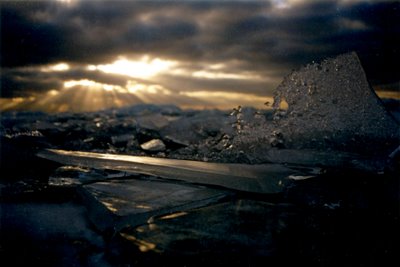 Here's a little poem I wrote long ago, about a young woman who lived on the shores of Mirror Lake, Lake Placid. She and her boyfriend lived on either side of the lake. One evening they told her family that they were going to marry. Then they crossed the lake to tell his family the news. As they returned, she fell through the ice.

The story felt entirely kindred to me, back then. I tried to write this poem many times. Once I typed my long hair around the platen* of my electric typewriter (so long ago!) when I tried to write it. Eventually it emerged very easily. But of course it never matched the dream in my head.

Now I live by an often-frozen lake. Last year Susquehanna the chocolate lab fell through the ice while walking with my husband (2:00 a. m., naturally.) Suppose I ought to write one for her as well!


Our district's bedtime tales of snow are cruel.
The steps of toddlers, moving back and forth
Between two doors, the sled runs to a pond.

At Mirror Lake a woman slipped through ice
And drank the cold. In blue twilight she saw
Lucent souls of lost unlucky children

Suspended in the ice, or floating past
In sodden hoods and gowns, unharmed by smiles
Of pike. Claire spoke; then she forgot all words.

The man detected nothing. Logged, his sleeve
Now strained in silence that the blackbirds fled.
He felt the world attending as he fished.

And afterward he proved the orphic voice
To be a kind of choking, stop and start.
The leastmost tendril crept across his wrist.

She didn't want to come. She didn't want
That birth. Claire wanted nothing. Still, she was
Upraised by hair from water's placid womb.

It seemed there was no link with nature's dark.
And after all, she lived. The neighbors sprang
From shining homes to help him lift her forth.

The snow kept on, tireless, wide spaced as stars.

Slip down the page for the last batch of poetry aphorisms. Perhaps I'm done with those. Thanks to everybody who let me know the ones they liked best--and any more comments in that line will be welcome and interesting to me. And thanks to all for reading.

CREDITS: Chris LaCroix of London, Ontario took the picture above, "Ice shots on Lake Erie 3." He says: "These are shots of ice formations, taken about 300 yards out from shore on Lake Erie at Port Stanley, Ontario." Thanks to him and www.sxc.hu/.

****************
I’m a ‘Spotlight’ poet for the second time at The HyperTexts. This means that Mike Burch says some attractive things about my poems on the Current and Back Issues page, and that Spotlight links there and on the home page will take the reader to a group of my poems, most already published elsewhere. You can see a goodly selection of other poets who like to fool with form under the “Contemporary Poets” section on the home page. Other interesting things appear as well—poets of the Holocaust, poetry in translation, and more. Links to poems by the editors appear at the foot.

*Thanks to my dear mother for writing me that "a typewriter has a platen, not a patten." I thought it wasn't quite right, but unfortunately there are sooo many people on the web who think that it is a patten that I figured they were right. Next time, the OED.
Posted by Marly Youmans at 4:00 AM