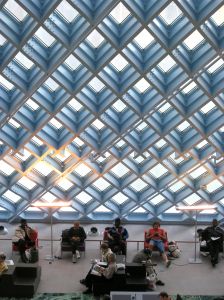 Lately I’ve been rereading Yeats, and once again thinking that there is no reading like rereading. I ought to do even more rereading, particularly of current books, because it is in rereading that a story or poem reveals itself—and tells us the extent of its merit. Most reviewers know only the first cursory passage through a work when they pen a review; a reader can know more. Though life is short and art long, we ought to reread often, because it is there that we “dive,” as Melville would say.

I’m finding that Yeats stands up. He manages to speak to me differently at every age. Right now I am touched by some of the youthful poems—they speak so eloquently of dreamy youth and aspiration—but it is the power of the old man Yeats that shakes me, and his determination to live to the end, to make first-rate art until the end of making. His creation of an alternate universe for himself seems far more sensible as a poet’s tool than it did when I was younger.

While I tend to read a lot of older writers again and again and again—a thing that began with my first-grade obsession with Lewis Carroll—there are few contemporaries that I’ve treated that way. If I try to pick out what books and stories and poems by living authors that I’ve read for a second or third time in the course of 2006, I can’t recall very many: poems in Catching Light by Kathryn Stripling Byer and Philokalia by Scott Cairns; Christopher Logue’s War Music; various essays in Seamus Heaney’s Finders Keepers; the story, “Creation,” by Jeffrey Ford; the delicious fairy tale, Howl’s Moving Castle, by Diana Wynne Jones, as well as a Chrestomanci story or two; a translation of Leena Krohn’s Tainaron: Mail from Another City; various poems and stories by writers who are penpals. No doubt there are others that don’t immediately jump to mind, but what I remember is more first-time reads. Reading to children makes me reread living authors, I see, and it seems that I may reread poetry by them more often than prose.

Perhaps next year I should reread more books by living authors. And it would be interesting to collect a list of what other people find satisfying as rereads by contemporaries . . .

***
The photograph is courtesy of www.sxc.hu and Nils Thingvall of Orlando, Florida. “Readers Under Diamonds” is a picture of "readers in the Seattle Public Library under an expanse of diamond-shaped windows."

Email ThisBlogThis!Share to TwitterShare to FacebookShare to Pinterest
Labels: rereading