Fenimore Cooper in the Easter Palace 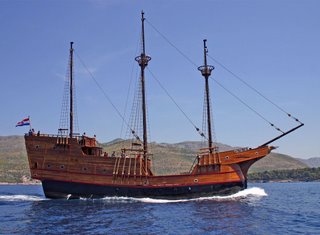 Here during Easter week we have: what may become an Annual Rant Against Fenimore (really, I love him, honest); a poem from my little class on the great religious poets; a good-for-the-season rant from Luther about God, writers, and asses' ears; a cautionary quote; the veritable key to good health; a silly joke that will make you laugh if you are lucky enough to be a silly person who has not heard the joke; and important information about Bun Houses. This is as close to a card from me as anybody is going to get!

For the past six weeks I've taught a class on sacred poetry--Donne, Herbert, Marvell, Czeslaw Milosz, Kathleen Raine, Charles Causley, and more--at Christ Church Cooperstown, where James Fenimore Cooper was Senior Warden and church renovator. Fenimore is always the writer when locals think of "the writer." People throw him up in my face at parties! He meets me everywhere in the landscape, and even his respectable though moldering bones don't seem to get any peace but have to be mentioned at every twist and turn of life...

His angels and demons of good and evil appear to still be around as well, only they aren't just called Indians anymore--they appear under many guises and fly about near and far, bearing love or terror through the shattered world.

When I am irritated beyond bearing with Fenimore's omnipresence, I beard him in his den by reading that marvelous document, Fenimore Cooper’s Literary Offenses, by Mr. Mark Twain. This I find to be consoling and amusing, without fail. I highly recommend it. I may even have recommended it before.

Here is one of the poems that I brought to my class. It is not by Fenimore Cooper. One really must thank heaven for the smaller mercies.

Three masts has the thrusting ship,
Three masts will she wear
When she like Christ our Saviour
Walks on the watery stair.

One stands at the fore
To meet the weather wild
As He who once in winter
Was a little child.

One grows after
From step to the sky
For Him who once was keel-hauled
And hung up to die.

One stands amidships
Before fore and mizzen
Pointing to Paradise
For Him who is risen.

Three masts will grow on the green ship
Before she quits the quay,
For Father, Son, and Holy Ghost:
Blessed Trinity.

And that flourishing little poem is by the late Charles Causley, sailor and teacher and poet to Cornwall and the world.

Here's a bit off the back of my copy of his Collected Poems, 1951-1975, a lovely edition from David R. Godine. (There's a newer Collected as well.) Causley is one of our language's last great popular poets: his verse rhymes; he employs traditional forms such as the ballad; he writes of the sea, of children, of war, of Cornwall where he has always lived and taught. There's also this note from Derek Parker: The truth about Causley is that he is simply the best poet of his kind we have had since the turn of the century.

Happy Easter to you, near and far. May your ship grow green...

"You know what one of my heroes—a hero, notwithstanding all the warts—said about those who were delighted about the success of their books? Luther advised them to grab themselves by their ears, and if they grabbed themselves well, they would discover a pair of long, shaggy donkey ears! He didn’t think that an author determined the value of a book. He certainly wouldn’t have thought that that the market determined it, or committees who decide about awards, or even the true connoisseurs of good books. In his mind, God determines a book’s value—a tough critic, but a generous one too."
--Miroslav Volf, Free of Charge: Giving and Forgiving in a Culture Stripped of Grace (Zondervan; The Archbishop's Official 2006 Lent Book)

Follow, poet, follow right
To the bottom of the night,
With your unconstraining voice
Still persuade us to rejoice.
--W. H. Auden, In Memory of W. B. Yeats
I tend to find troublesome the fact that many novelists and poets and playwrights like to pontificate about politics. But I think Easter is probably an appropriate time to remind ourselves that the religious tolerance and freedom of speech that our founding parents held dear as self-evident and precious goods are fragile: "Iran’s supreme leader instructed Muslims around the world to serve as executioners of the Islamic Republic—and they did, killing not Rushdie himself but his Japanese translator, and stabbing the Italian translator, and shooting the Italian publisher, and killing three dozen persons with no connection to the book when a mob burned down a hotel because of the presence of the novelist’s Turkish translator."
--Mark Steyn, in City Journal

Hot cross buns are breakfast at the Palace this Friday: "If properly made on the actual day -- Good Friday--they are supposed to protect the whole family from fires, rats, accidents and shipwrecks." --Caroline Conran, British Cooking

Fires, rats, accidents, shipwrecks. Why wouldn't you eat them?

What do you get if you pour boiling water down a rabbit hole? That's right, hot cross bunnies...

ONE A PENNY, TWO A PENNY,
HOT CROSS BUNS!

And now, from Hillman's Hyperlinked and Searchable Chambers’ Book of Days: Whether it be from failing appetite, the chilling effects of age, or any other fault in ourselves, we cannot say; but it strikes us that neither in the bakers' shops, nor from the baskets of the street-vendors, can one now get hot cross-buns comparable to those of past times. They want the spice, the crispness, the everything they once had. Older people than we speak also with mournful affection of the two noted bun-houses of Chelsea. Nay, they were Royal bun-houses, if their signs could be believed, the popular legend always insinuating that the King himself had stopped there, bought, and eaten of the buns. Early in the present century, families of the middle classes walked a considerable way to taste the delicacies of the Chelsea bun-houses, on the seats beneath the shed which screened the pavement in front. An insane rivalry, of course, existed between the two houses, one pretending to be The Chelsea Bun-house, and the other The Real Old Original Chelsea Bun-house. Heaven knows where the truth lay, but one thing was certain and assured to the innocent public, that the buns of both were so very good that it was utterly impossible to give an exclusive verdict in favour of either."

"Karaka dubrovnik," a royalty free photograph by Jeffrey Krvopic of Dubrovnik, Croatia, shows a replica of a sixteenth-century ship. www.sxc.hu/
Posted by Marly Youmans at 4:00 AM