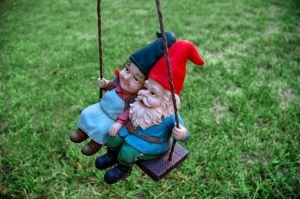 Scandalous news comes to us over the sea: an article in Germany’s Deutsche Welle, “Experts Revise Theory on Origin of Garden Gnomes,” recently put forward the inflammatory-to-Thuringians claim that south Thuringia may not be the historical source of the garden gnome. A gnomologist (also the owner of a Gnome Theme Park--is this not some gross conflict of interest between the noble and the mercantile?) evidently discovered an advertisement in the Deutsche Illustrirte Zeitung (1886) that suggests that the true historical Eden of the gnome may be Drawno, Poland, a town that once lay in German Pomerania, where a great river is divided into four tributaries running with clay slip, and where you will break your teeth on any apple you try to eat.

Digression: I wonder whether there is some obscure connection between Pomeranian doglets and the faces of garden gnomes. Something about the nose, or the eyes, perhaps…

Deutsche Welle claims that most historians of the gnome believe that the garden gnomes had its genesis in one of three terracotta centers—Thuringia, Drawno (Poland), or Usti nad Labem (Czech). This was news to me, as all my local gnomes appear to have been born hereabouts, or to have migrated to the place from elsewhere on the east coast. None of them grew up in a terracotta city, or lived at any time in a terracotta cottage, manor, tower, palace, or other such terracotta place of residence.

Evidently this new scrap of evidence tossed the Gnome Congress in Trusetal, Thuringia into something of an uproar. And as we all know, garden gnomes do not bear tossing well, and many a shatter-thwock-ping-ping-ping follows a healthy toss. I'd like to have seen the convention hall by the close of events.

* * *
RAVENRY
If you ordered a Raven, please keep your eye—now and then, that is; don't be so obsessive!--on the comments section of the Ravenous post whereof thou knowest.

* * *
THE BIZ
Once again I’ve been asked to pontificate on what writers can do to help market and promote. Infinite is the curiosity of younger scribblers. Touching is their eagerness. Swift approaches their doom and general disillusionment. Etc.

And there is a certain absurdity in somebody asking me that question because I, like almost all writers, have zero training in such things. Occasionally a writer like Jeff Vandermeer comes along, who is a sort of genius in this area, and who spends hours every day on that topic. But most writers don't have that spark in the business arena.

Jeff gets to know lots of people and then has a long list he can call on for help. Recently I posted some information about a book for him, and I also suggested some Carolina booksellers I thought especially helpful. Point #2: Learn how to marshall help, schmooze, and so on.

I know other writers who frequently ask readers to do specific things to help out the cause. It's a good cause, after all. Books are good; baby must have shoes. There are even some writers who have a sort of “army” of readers who are committed to spreading the news—I find this sort of writer's nerve and complicated organization to be astounding and even somewhat frightening. I come over all agoraphobic, just thinking about it. (I am not agoraphobic, but I have two writer friends who are. Did we cover the fact that writers are odd?) Point #3: Do everything that Marly is too afflicted with modesty (or queasiness or whatever it is) to do. Sure, ask.

I always make an interactive database for my publisher, including information about what I wish they would do and about my own linkages to the wider world.

And I suggest things that I wish would happen; this is called fantasy, or literary fantasy. Sometimes wishes come true.

When The Wolf Pit came out right after 9-11, I wrote reviewers directly because it wasn’t getting reviewed, despite the fact that Catherwood had gotten plenty of good reviews. And that was a worthwhile effort and netted more than 30 reviews, mostly in newspapers. I had, you note, a special reason to write, so it didn’t bug the books editors too much. But it is very possible to bug them too much. And that is not good.

I do events around publication time: the usual sort of thing. Some years are better than others because life is rather complicated and gets in the way of such things. Children, death, and sundry other issues crop up.

And I’m building the Palace, ethereal stone by stone. (Another thing: learn to blog at a high rate of speed, or it could begin to take over real life.)

Lately I’ve set out to publish short fiction in anthologies and magazines, in part to support my book-length fiction, in part because I'm currently subject to a story-writing mania.

Oh, and I suppose the Raven discount was marketing, wasn't it?

* * * * *
LIFE'S LITTLE QUESTIONS
If there’s anything else that a.) I don’t know anything about but that b.) you would like to hear me burble wisely about, please let me know. Anything. Leave a note in comments or drop me an email. Golf, baseball (despite the Baseball Hall of Fame's best efforts), the gold standard, the exact composition of a particular glacial moraine, the dialects of China: these are all things I know nothing about. There are millions more such topics. Just ask.

* *
GNOME PHOTO CREDIT The picture was taken by Lonnie Bradley, somewhere near wonderful, wacky Waco, Texas. He says that his little friends (or perhaps they are relatives) eat four times as much as regular Texans. He doesn't say whether they are also four times as big as regular gnomes. He doesn't say whether he is, in fact, also a garden gnome. I'd like to know. Also: their names and any gnomely occupations. And whether they eat barbecue. www.sxc.hu/