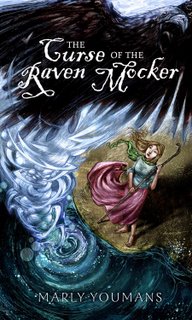 Thanks to the bloggettes--mostly regular visitors--who ordered a book. If you like it, please pass the word! More news here soon. I'll post an address for sending to me in Comments, plus info on when the books arrive. I don't really know how long it'll take, but the order is in.

I have a chance to get some first edition hardcover copies of The Curse of the Raven Mocker (Farrar, Straus & Giroux, 2003) a little more cheaply than my usual 40% author-discount-plus-shipping, and I've decided that I might like to spring for a book promo deal of my very own for visitors to The Palace at 2:00 a.m.

If you're interested in a copy or copies and are in the U. S., I'll send you one or more signed or signed-and-inscribed book(s) for the grand amount of five dollars each. The retail price is $18.00. I'll cover the postage to me and then to you plus the cost of the book (don't count on first class!), and I'll cover any gap between that amount and my cost--I'm not quite sure what the total will be.

I'm not going to ask for anything in return, though I hope you'll like it enough to send out some word-of-mouth and to consider buying a copy of Ingledove at your favorite bookstore, either in the Farrar, Straus & Giroux hardcover or the upcoming Firebird paperback.

If you're interested, leave me a note in comments by midnight on April 6th. Better yet, 2:00 a.m. the next day! I'll figure out how to manage the logistics later. . . There will be a limited number of books available (matching the limits of the royal purse), but order as many or as few as you like; I'm don't imagine that buyers from three days of "palace traffic" will be too difficult to manage!

The Curse of the Raven Mocker -

If you haven't heard about this novel, that may be because it was published as a Young Adult book. Then again, it's a novel that eludes categories right and left. It's a fantasy—but nothing like most books in that genre. It draws a lot on Cherokee lore, but it isn't a "Native American" book. It is a portrait of the artist as a girl about to become a woman, and a story of the Spirit (and of spiritual warfare). As I have learned since first getting acquainted with her work a year and a half ago, Youmans (pronounced like "yeoman" with an "s" added) is the best-kept secret among contemporary American writers. She writes like an angel—an angel who has learned what it is to be human. I hope you too will discover Youmansland. --Books & Culture.
*******
Raven Mocker is Wonderful Feat of Imagination ". . . This is a book that is destined to become a classic and to win many awards. It is my early favorite for the National Book Award for Children's Literature." --Greg Langley, The Baton Rouge Advocate
Well, that didn't happen, but it was a splendid thought!

INGLEDOVE is a marvelous book. I loved it and thought it was even better than Marly Youmans's first book about the magic land of Adantis, The Curse of the Raven Mocker, where the inhabitants and their magic are half Cherokee, half Border Celtic. I loved the way the Hidden Land materializes around you as you read as naturally as breathing. And the magic seems to arise almost as naturally--though it can be as sudden and cruel as a snakebite--and all of it is always breathtakingly wonderful. Then, instead of leaving you simply gasping at her marvels, Marly Youmans has the courage and the good sense to point out that experiences of this order cause people to change. I really admired this book. --Diana Wynne Jones

In this exceptional novel Youmans skillfully mixes Celtic, Appalachian and Cherokee mythology and language to create Adantis, a fantastic world, half hidden in nature. Abandoned by their father and orphaned at their mother's death, Ingledove and her brother Lang know Adantis only as a fairy tale world from their mother's stories. Yet when Ingledove’s brother Lang is haunted by a beautiful serpent demon, the children must make the perilous journey to Adantis to free Lang from his deadly enchantment. There Ingledove discovers her mother’s legacy, the powerful beauty of Adantis, and her own inner strength. Youmans’ characters are compelling; the dialogue is unique, rich with invented vocabulary. Her prose, lush and evocative as fireflies, seems to lift from the pages. A simply beautiful novel. --Midori Snyder @ The Endicott Studio

Both books will be available in paperback from Sharyn November's Firebird imprint in the fall. For more review clips and an interview, click on the titles to the right, under the "Bookshelf."

Posted by Marly Youmans at 4:02 AM