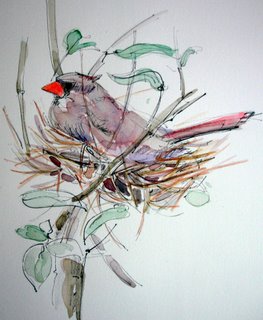 Tolly went to sleep, but for some reason he woke very early, when it was just beginning to get light, too soon for any bird but the thrush to be awake. He looked out of the window and saw the garden dim and far below, with wisps of mist caught in the bushes. When the thrush was silent, there was not a sound in the world. The garden was waiting to be brought to life. He dressed and slipped quietly downstairs and out, feeling inclined in the half-light to keep near cover, to move carefully and look and listen like a wild animal. He didn't know if he was play-acting or not, the dawn was so hushed and hushing. The bamboo hedge and willow thickets seemed to be the places of most attraction. Bamboo is jungle-like, beautiful, light and swaying (though not swaying at all now, but still as in a trance). No one can see what is hiding in it, and any bird that is startled there makes a loud rattle of canes and stiff leaves as it breaks out. Tolly crept along, watching the ground because a fallen cane in the rough bumpy grass could easily trip him up. He heard a startling, rushing noise close behind him, and two swans passed low overhead, the sound of their flight, once they had gone by, continuing far up the river, and in the water underneath them their refelctions flew upside down. After that the world began to tick, faint tuts and chucks, and little flutters and cracklings, as the birds woke up, talked in their sleep, stretched their wings, scratched their ears, and shifted their positions. And all the insects did the same. Even the leaves had a look of waking up, lifting themselves a little toward the sky as it got bluer. The thrush was singing quietly now from the knob on the point of the gable, and a robin close to Tolly's ear was just trying under his breath to see if he was in voice, when a moor hen shot out from under the bamboo calling in a panic to her chicks to come away from danger. Several bobbin-sized babies ran after her...

The nesting cardinal is from Laurelines,
http://laurelines.typepad.com/my_weblog/.
Creative Commons License.
Posted by Marly Youmans at 4:00 AM