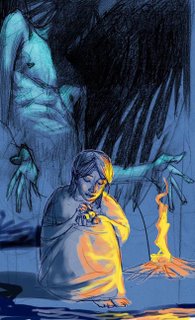 A reprint of "Tall Jorinda" is up at this week's Strange Horizons. There's a link to a comments page sandwiched between a bio note and a credit to Capitol Magazine. I've always been grateful to Capitol for the bolus of money that came with their New Writers Award. I was a week or so away from having my first baby, and the money came at the right time. And the reading and reception at the Shaker Museum made me feel that I wasn't entirely alone, writing in the crook of the hallway.

One thing I find curious is that editors in the genre realm appear to be far more interested in doing actual editing than editors of literary magazines. Jed Hartman gave me heaps of "tweaking" comments that helped me look at an old story anew; Ellen Datlow gave me lots of comments on a SCIFICTION story. Despite the fact that I've published many stories and poems in literary magazines, I haven't encountered that attitude much elsewhere. Writer/editor Melissa Pritchard gave me some for "A Child in Summer" when it came out in StoryQuarterly. Jill Lamar gave me very useful and interesting comments for "The Angel with the Broken Face," out in the current issue of Mars Hill Review. Beyond those, I don't remember much focus on genuine editing.

On the issue of being alone in that dark corner of the hallway: I haven't been alone since that time. Why do children always cram into the room where you're working? Sometimes all five of us are shoehorned into a little box; we could've bought a wee hovel instead of a rambling federal house. Right now a fifty-pound boy is sitting on my lap, leaning in toward the screen and sticking his elbows on the keyboard!

I peeked at the comments and see that, though most are devoted to the unusual fact of a reprint, there's a splendiferous one from poet Jeffery Beam. And I just found his website: http://www.unc.edu/~jeffbeam/. He's a wonderful poet, a real lover of word-music and beauty. And Corey Mesler left a nice note, and it reminds me that he has a brand new book out from Livingston Press, We Are Billion-Year-Old Carbon. Well, maybe not yet. I just looked and pub date seems to be February...

The illustration above is another proposal for the Firebird paperback cover of The Curse of the Raven Mocker. Renato Alarcao has drawn Adanta holding a wren in her hands, with a raven mocker bursting into feathers behind her.
Posted by Marly Youmans at 7:22 PM