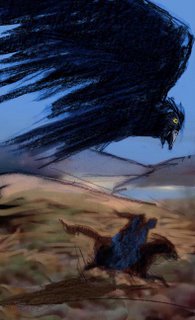 Illustration: a preliminary sketch for The Curse of the Raven Mocker showing Adanta and Tass racing across the mountains, a raven (mocker) overhead. Copyright Renato Alarcao.

Roy Herron (state senator and floor leader from Tennessee) has sent me a copy of his book, Tennessee Political Humor--subtitled "some of these jokes you voted for"--co-authored by L. H. "Cotton" Ivy. It is wonderfully funny to read aloud, almost as funny as listening to Roy himself.

The book is spilling over with colorful characters. Here's a figure of interest: "E. H. Crump was a legendary leader with few scruples about elections, but he had considerable creativity in crucifying a candidate he opposed."

Here's Boss Crump's venom in action--and I'm willing to bet that it has more verve and gusto and swing than most free verse poems of 2005 A. D.:

I have said before, and I repeat it now,
that in the art galleries of Paris there are 27 pictures
of Judas Iscariot.
None look alike but all resemble Gordon Browning;
that neither his head, heart nor hand can be trusted;
that he would milk his neighbor's cow through a crack in the fence;
that of 206 bones in his body there isn't one that is genuine;
that his heart has beaten over two billion times
without a single sincere beat.

Now there's some strong down-home rhetorical artfulness and flourish. Give me some of that rollicking Southern style, along with a plate of greens and rutabaga scratchbacks, willya?
Posted by Marly Youmans at 1:22 PM