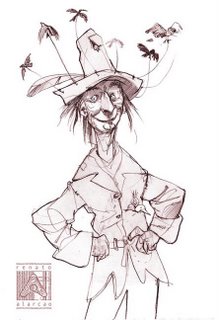 The pot boy had to go to the kitchen to do a mountain range of Thanksgiving dishes. He’ll be back, some day . . . And that's not the pot boy at left.

That's Magpie Joe, a flighty character from The Curse of the Raven Mocker, and the picture is one of a number of proposed sketches for the Firebird (Penguin) paperback. It won't show up in the book, but Renato Alarcao gave me permission to post the unused pictures on my web site (more to come on this and the Mocker page).

Renato is an illustrator of abundance and gusto and beauty, and his work is starting to appear in this country. (He lives in Rio with his wife and brand new baby and without his famous flying cat, who has moved to farther parts.) Robbie Mayes deserves credit for getting Renato to do the jacket and frontispiece for Ingledove, and I'm glad that Sharyn November is recruiting a second piece by Renato to "match" that book rather than starting over with a new artist.

Steve Cieslawski did the original cover for The Curse of the Raven Mocker (FSG, 2003), but he no longer does illustration. Instead, he's a full-time painter in oils--and he has a show on at CFM Gallery in New York. All three of his solo shows can be seen on the CFM site, and they're well worth a visit.

On Thanksgiving, one fattens on stories and funny anecdotes as well as food. I give this one in honor of the Day, because it has the appropriate fat bellies, and because I laughed over its utter silliness while trying to decide between the mincemeat, pumpkin, and pineapple-cream-cheese pies—or would it be gingerbread with whipped cream?

A nurse from the city took a job at Mary Imogene Bassett Hospital in Cooperstown. Being thoroughly steeped in NYC and its ways, she sometimes was bemused about the goings-on of the Yankee ruralite in the hinterlands of Otsego County.

One day at Bassett, she described a poignant sight: a big old daddy groundhog, a mama groundhog, and a wee gang of smaller but still substantial groundhogs draped over the top strand of a barbed wire fence. Their poor little woodchuck feet dangled down pitiably, and their fat pot bellies sagged against the wire.

“It’s so sad,” she said; “they were jumping the fence and didn’t make it.”

My father ate woodchucks in Depression-era south Georgia. When he could get one, that is: his family scoured the fields and sky and swamp for edibles on leg or wing until there wasn't much moving on more than two legs. He said woodchucks weren't too bad, though fatty.