Though most people who keep up with me go to social media sites, I'm posting this for the wonderful dinosaurs who still follow blogs and don't follow facebook. It's a copy of the facebook interview from The Jackson Center for Creative Writing at Hollins. Conducted by MFA student Lena Fultz. Thanks to her and to the Jackson Center!

Marly Youmans describes herself as a “Carolinian astray in snowy upstate New York.” After graduating from Hollins in 1975, she has written across genres—novels, short stories, and poetry. Youmans returned to Hollins in 2010 to serve as a Writer in Residence for the Children’s Literature summer program.

Her work continues to win awards, with novels regularly appearing as finalists in ForeWord’s Book of the Year contest, among many others. John Wilson, editor at Books and Culture Magazine, describes Youmans as “the best-kept secret among contemporary American writers. She writes like an angel—an angel who has learned what it is to be human.”

Youmans spoke on her time at Hollins and her most recent (fifteenth!) novel, CHARIS IN THE WORLD OF WONDERS, with MFA student Lena Fultz.

LF:  What was your experience at Hollins like? What did you take away from your time here?

MY:  I wrote reams of poems at Hollins, and when I left at 20, I threw them all away—very much a young poet’s thing to do, though now I regret renouncing all those sparks of youth. Some years ago, Lee Smith told me that she found one of those old poems lying about the department and liked it: “The Magician’s Daughter.”

Some of the women who were entranced with poetry (and the beloved Richard Dillard) are still friends of mine, especially Mary Bullington, Robbi (Kellman) Nester, and Susan Hankla. Susan was at Brown with me as well (riotous days!), and my fifteenth book, CHARIS IN THE WORLD OF WONDERS, is dedicated to Richard and Susan.

Amanda Cockrell invited me to be Writer in Residence at the summer Children’s Literature program some years back, and I enjoyed the return and still hear from some of the students. Just last fall, I had the decided pleasure of discussing Susan Hankla’s first full-length book, CLINCH RIVER, in THE HOLLINS CRITIC.

I suppose that many a young writer discovers a need to rebel against what she has been taught in school, and against the times. And so I have ended up bounding away from the vers libre of Modernism and its after-shock movements, and have embraced meter and sometimes rhyme as liberating and strengthening forces. I’ve gone back to older and larger definitions of what poetry can be and can include: narrative and long poem, as in THE THRONE OF PSYCHE; long sequence with repeating characters, as in THE BOOK OF THE RED KING; epic adventure, as in THALIAD. Falling into the land of stories helped, for I soon wanted my poems and fiction to be entirely different creatures.

LF:  Your recent novel, CHARIS IN THE WORLD OF WONDERS, is set in Puritan New England. What does your research process look like for writing in a time before you were born? What is the biggest challenge?

MY:  In the books where I’ve delved into the past, I’ve moved through regions of time where I felt comfortable: CATHERWOOD and CHARIS in the seventeenth century, THE WOLF PIT in the nineteenth, and A DEATH AT THE WHITE CAMELLIA ORPHANGE in the Depression.

I tend to consider fiction-time as a place rather than as an inaccessible era. Some of this is due to my extended family in Georgia. As a child, I spent some of my summer traveling-time at my maternal grandmother’s big Queen Anne house and property in Collins. My mother was the accidental ninth baby of a woman born in 1883; the home and our matriarch, Lila Eugenia Arnold Morris, felt Edwardian. And some of my vacation time was spent with my paternal grandparents; the sharecropper’s shack and farm are closely described in A DEATH AT THE WHITE CAMELLIA ORPHANAGE. Utilities were minimal, comforts sparse, mules stubborn, sun boiling. Tenant labors of ploughing in the fields, picking cotton and tobacco, preserving food, or making turpentine in the piney woods didn’t appear impossibly distant from the peasant’s vassal duties in a medieval and feudal world. My two Georgia family homes have been a blessing to me as settings for my imagination and as ways of understanding how to live and move in the past, as well as how to navigate a landscape of hardship, toil, and poverty.

(Here I should pause and thank my late father for the burning motivation that made him a teenage tailgunner on a B-17 in World War II and afterward a professor of analytical chemistry—one who bought his elderly parents a house in town. And thank you, America, for the G. I. bill.)

For CHARIS IN THE WORLD OF WONDERS, I could skip over a lot of basic research because I had read so much colonial documentation and literature in earlier years. But I spent nine days at the American Antiquarian Society in Worcester, looking up specific things: occupations and titles in Massachusetts Bay Colony; accounts of Haverhill and Andover (now North Andover); letters; modes of address in England and the colonies; laws and punishment; differences between English and colonial goldsmiths; silver styles; contracts; marriage ways; recipes, etc.

Mainly, I didn’t want to tumble into the silly ways in which “the godly,” as they called themselves, have been depicted with black clothes (out of reach for most), buckles on hats, constant dreariness, and so on. The keys to writing a novel set in the past are few but essential: never put contemporary beliefs and contemporary characters into the past (unless, of course, you are writing a time-travel book!); show the same amount of “stuff” and landscape as you would in writing of your own place and time; don’t feel that you must prove (by over-reference to songs, politicians, scandals, etc.) that a character really and truly is in past time; and wear any historical research lightly, avoiding the dread info-dump.

LF:  With the current state of the world right now, are you finding time and space to write? What does your writing routine (if you have one) look like?

MY: A great deal of my adult life has been spent as a mother of three (one is still at home), and children have no need for a writer. They need a writer about as much as an octopus needs a party dress, and this is a good thing; it has kept me from ever accumulating any big-headed thoughts and forced me to be ingenious about scraps of time. So no, I never developed a routine; I seem to be fatally allergic to anything that smacks of over-organization, outlines, or the old-fashioned writer with wife who protects writing time. I do, however, have a husband who cooks and bakes wonderfully well, and for that I am grateful.

Despite the pandemic, I am dividing my days between Cooperstown, New York, my home for the last 22 years, and Cullowhee, North Carolina, where I attended high school and where my mother lives. So, I’m sometimes shuttling back and forth along the Appalachian chain . . . Given my current situation, I’ve decided not to start a new novel until later, but I am writing poems.

LF:  Any future projects or upcoming events we can look forward to?

MY:  I expect that the next book will be a poetry collection. Meanwhile, reviews and interviews and podcasts for CHARIS are still trickling out—it seems that I have an unfortunate tendency to have books launch during national disasters, but I’m hoping that readers will be kind enough to support pandemic books! 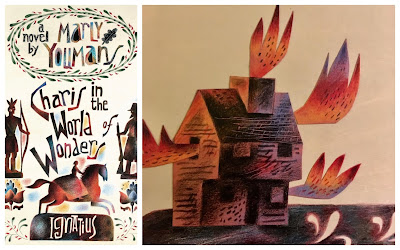 Posted by Marly Youmans at 8:23 AM

Email ThisBlogThis!Share to TwitterShare to FacebookShare to Pinterest
Labels: Charis in the World of Wonders, Interview, interviews, novel