On traveling in the past: Charis in the World of Wonders 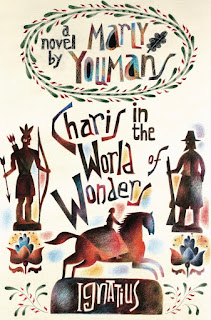 One of the demands of writing a novel set in the past is that a writer not put people and thoughts of his or her own day into fancy dress. Not give us woke people in linsey-woolsey. Not present people with our own concerns about climate (well, maybe if it's a Ruskin--so prescient!) or our own beliefs about how a woman may be heroic or our own attitudes toward childbirth or child-rearing or many another thing. In Catherwood, A Death at the White Camellia Orphanage, Maze of Blood, and now Charis in the World of Wonders, my desire is always to enter into another world, to believe that time is a realm I can find and walk around in if I am imaginative and reasonably knowledgeable.

For the new book, one wish of mine was that Charis be a convincing citizen of the godly (Puritan to us), and that I would not fail to enter into her feelings about family, the wilderness, native peoples, the French, God, marriage, childbirth, community, and all the terrors and pleasures of the New World. And where she came to differ from the most common view, it had to be because she was forced by circumstances to learn something new that tempered or transformed what she thought to be the truth. It struck me that the most difficult thing to portray for contemporary readers would be religious faith and feeling, now so alien to many, and so easy to get wrong.

So I was especially pleased to see a comment about Charis's faith from poet Sally Thomas, discussing a review at the DarwinCatholic blog. Here it is, pilfered from facebook:


I particularly appreciate the allusion to Ron Hansen's Mariette in Ecstasy in this review. I hadn't thought of those two novels as parallel in any way, but among other things, a comparison on the point of the un-ironic handling of religious sensibility is apt. It is so very, very easy for the contemporary novel to wink and nudge at the reader – the religious characters are either dumber than we are in their belief, or are hypocrites whom we see through (wink wink nudge nudge). Or else they're caught in amber, as not-quite-living relics of a not-quite-living past.

What I think both Charis and Mariette accomplish (though this is far from the only thing both novels accomplish) is to present a spectrum of characters, a whole human range of people, who all believe in God (and further, operate wholly within the world of a shared tradition of belief). There is awareness of a world outside that tradition – for Charis it's the indigenous tribes and the Catholic French. In fact, Charis goes farther in imagining the whole diverse tapestry of its world than I remember Mariette's doing. But the world that is each novel's focus is itself a tapestry of human personalities and livings-out of belief. This is part of why, as a novel taking up religion as a concern, each one rings true.

And surprise, Sally Thomas is doing a launch for her poetry book Motherland on Zoom on this very day at 3:00! Go HERE if you want an invitation.
Posted by Marly Youmans at 11:06 AM

Email ThisBlogThis!Share to TwitterShare to FacebookShare to Pinterest
Labels: Charis in the World of Wonders, historical setting, past, reviews, Sally Thomas