Advice to writers, even my own, makes me cringe a little. Perhaps I prefer some silly bit of advice like David Sedaris saying that you must write with a candy cane pen.

Because it doesn't matter a whit what writers say about writing or painters about painting or dancers about dancing, etc. Just get on with the playing with words, the pushing of paint, the moving of a body in the air, or whatever it is that draws you.

And if, after a while, you don't want to do that thing, know it and stop (preferable to having the desire seep away in dribs and drabs, I imagine, though I am not sure. Perhaps I am wrong. Perhaps that is easier. And then there are those who compare making something out of words to slashing open a vein--what of them? Terrible to have no sense of joy and play...)

It is impossible to say anything against advice without committing advice. Silence is, I expect, better.

What's up on this rainy day (other than dandelions)

I'm writing a little play for teens and children today. It's about the boy who becomes King David... There will be lots and lots of sheep. (Last year I was commissioned to write one that I called "The Great Flood of All the World." Fun.) And I'm daydreaming about a novel that I want to write. And maybe I'll do a little tinkering with poems. Also: massive heaps of laundry are mumbling my name.

Thank you to those of you

who voted for Maze of Blood in the comments at the Foreword site. (Voting closes in a week, but such things generally result in a small flurry upon announcement.) If you were here, I would give you a peach-colored tulip with raindrops. 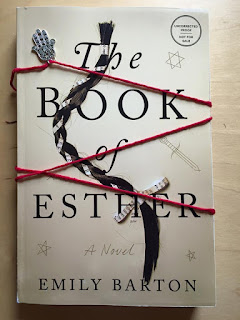 The truth is, I'm not very good at asking for anything that might help my books, even now that I've moved to a small press and university press setting, where I ought to do so. Thanking people for helpful acts is easy. When I was struck by how easily and forthrightly McKinty asks for Amazon reviews and support for his novels, I came to the realization that I just can't do it. My polite Southern ancestors all seem to sit up in their graves and stare balefully.

But I am very thankful when people show that they care about the books. I thank you. The green lawn and the wet tulips and uvularia with its yellow bell flowers all thank you, or so I declare! Words are magic.

has a new book. The Book of Esther. I'm not going to read it until later because I have a golem idea for a story, but I am going to get it to save. Here's a wonderful review that starts with the line, "In her third novel, brainy and ebulliently eloquent Barton (Brookland, 2006) tells the story of a Jewish Joan of Arc on the forbidding steppes between the Black and Caspian Seas."
Posted by Marly Youmans at 10:31 AM