Maze of Blood at First Things 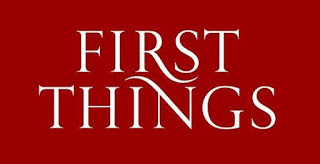 Having just fished a snow-laden contributor's copy of First Things out of the mailbox, I am pleased to find not only my review of A. M. Juster's St. Aldhelm's Riddles (thank you to Matthew Schmitz for asking), but also an appearance in the year's roundup of 2015. I'm very glad to be among the lucky few included in the essay.

Here's a look, for visitors who don't have a subscription. (The essay will probably up online later on, just as last year's was.) I should clarify that the reference to "who wasn't written for Marly or for me" is a glance back to prior paragraphs, where Claire Vaye Watkins is mentioned, along with her much-read (yes, I read it) essay in Tin House that stabs at a good many targets, especially "white male literati."

Marly Youmans's new novel, Maze of Blood, has an epigraph from Jorge Luis Borges (who wasn't writing for Marly or for me, but whose books I have read and reread over the years). It's taken from Borges's story "The Garden of the Forking Paths": I thought of a maze of mazes, of a sinuous, ever growing maze which would take in both past and future and would somehow involve the stars."
I hate to give away too much and spoil someone's first reading, but here I will be violating that rule a bit. Maze of Blood is (among other things) a novel about the imagination--"about it" by enacting it. (Coleridge is a tutelary presence throughout.) The protagonist, Conall Weaver, is based on Robert E. Howard, the creator of Conan the Barbarian. Youmans tells us that before the book begins. But it is not a novel "about" Howard. Rather, it takes his experience as a kind of template.
Howard committed suicide at the age of thirty--stunning, if you consider what he'd already achieved. (Lots of writers today have published very little by the time they are thirty!) Conall Weaver also kills himself--very early in the book. This is a novel told in reverse chronology: In the last section, Conall is a young boy.
By now, you may be shaking your head--what sort of book is this? "Experimental fiction"? Ugh. Actually, no--though it may not be your cup of tea in any case. If you are willing to trust the writer, you'll soon get the hang of it. Conall Weaver, like Robert E. Howard, grows up in hardscrabble Texas, a setting in which his writing seems out of place. But he's not just alienated from his setting (which he also loves); he feels at odds with his "time." As does Marly Youmans in her "time," which is ours as well. His stories are an act of rebellion and an act of celebration.
But this isn't simply a Portrait of the Artist--for Artists (or would-be Artists) only. We are all characters in search of an Author, so the Spirit of Story tells Conall:


For everything inside a story--and know most of all, that the world is a story and began with a word--is made up. And so the tale of a Green Knight with his chopped-off head still holding a knight of the Round Table to promises made is no less true than the tale of a man crammed with secrets who spontaneously combusts and leaves behind only a black, tallowy mark on the floorboards, and his story in turn is no less true than the tale of a Texas sharecropper's wife who has had a miscarriage only ten days before but just this morning was walking behind the mule and guiding the jerking plow.