Advent of: A Death at the White Camellia Orphanage 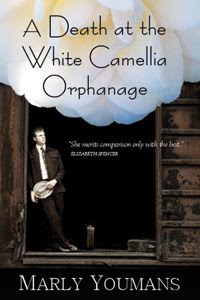 I just realized that a page for A Death at the White Camellia Orphanage has been up at Mercer University Press... O dummy me! There's an image of the jacket (I was told that there will be a seal for The Ferrol Sams Award but that they were deciding where to put it--I guess they're still pondering!) as well as ordering information and flap copy.
The Burt & Burt design team does all the Mercer jackets and so no doubt deserve credit for this one. The camellia photograph was taken by publishing assistant Mary Beth Kosowski (I thought that was the only cover image until a few minutes ago!) I quite like the way the Camellia is a sort of luminous cloud or planet hanging overhead.

What do you think?

Pub date will be March if we stay on track. Second pass notes are in, so no doubt we are on track!
A Death at the White Camellia Orphanage
By author: Marly Youmans
Product Code: H837
ISBN: 9780881462715
Binding Information: Hardback
Availability: Backorder policy
Price: $24.00

After a death at the White Camellia Orphanage, young Pip Tatnall leaves Lexsy, Georgia to become a road kid, riding the rails east, west, and north. A bright, unusual boy who is disillusioned at a young age, Pip believes that he sees guilt shining in the faces of men wherever he goes. On his picaresque journey, he sweeps through society, revealing the highest and lowest in human nature and only slowly coming to self-understanding. He searches the points of the compass for what will help, groping for a place where he can feel content, certain that he has no place where he belongs and that he rides the rails through a great darkness. His difficult path to collect enough radiance to light his way home is the road of a boy struggling to come to terms with the cruel but sometimes lovely world of Depression-era America. On Youmans’s prior forays into the past, reviewers praised her “spellbinding force” (Bob Sumner, Orlando Sentinel), “prodigious powers of description” (Philip Gambone, New York Times), “serious artistry,” “unobtrusively beautiful language,” and “considerable power” (Fred Chappell, Raleigh News & Observer), “haunting, lyrical language and fierce intelligence” (starred review, Publishers Weekly.) Howard Bahr wrote of The Wolf Pit, “Ms. Youmans is an inspiration to every writer who must compete with himself. I had thought Catherwood unsurpassable, but Ms. Youmans has done it. Her characters are real; they live and move in the stream of Time as if they had passed only yesterday. Her lyricism breaks my heart and fills me with envy and delight. No other writer I know of can bring the past to us so musically, so truly.”

I like that quote and am now dedicating the book to the inimitable Mr. Bahr!
Posted by Marly Youmans at 10:47 AM

Email ThisBlogThis!Share to TwitterShare to FacebookShare to Pinterest
Labels: A Death at the White Camellia Orphanage, Mercer University Press