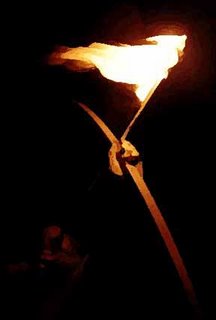 There is something touching about the old-fashioned hokiness of a homemade ceremony. At 6:00 on last Thursday evening a “crossing-over” ceremony for Scouts took place on the old stone bridge that the Clark family built close to the mouth of the Susquehanna. I’ve grown fond of these events. One of my favorites was a cold summer’s day—a wild, windy ceremony atop Star Field, with scudding clouds and grand views of the lake and hills, with the tethered meadow flowers and grasses running like mad from the gusts.

Mother Nature made sure that this event rivaled the Star Field ceremony in breeze and cold and beauty. It was already dark under the trees, though the ground was luminous with snow; above us could be glimpsed roofs and walls from the Clark houses—a sight tinged with a sort of melancholy end-of-things feeling, since the last Clark is childless. I was also thinking about a relative who was, even then, drawing close to death--about all sorts of crossings. In the near distance, I could see the old hanging ground and light spilling from my friend Gail’s kitchen window. The landscape contained a microcosm of long-ago but still apt possibilities for young men: the hanging ground; the mansion; the well-built arches of a bridge constructed by local stonemasons.

It was too windy for the candles set along the bridge to stay lit. Only the flaming arrows, shot as each of the oldest boys “crossed over,” burned like comets through the night and were extinguished in the slow-moving river. Mike played narrator, hoisting a lantern at the crest of the bridge. The younger boys stayed in their little packs, listening to the ceremony and jostling among themselves. I had a sweet and slightly sorrowful sense of them as children growing up, and remembered how some of them looked years back.

The ceremony had a strange poetry in that landscape and at that hour. It held a devotion to honor, ideals, and ethics that seemed to spring like alien fire from a lost realm into our own darkening world. The seven virtues, the Indian with his animals from whom he learns, the clean white blaze of purity and aspiration, the arrow of light: all these things were essentially “literary” devices, only tenuously rooted to a mythology. And yet there was a potency to the event, and something strangely lovely about hearing the names and stories of the virtues--about listening to the voices of the four winds speaking into the windy air.

*** *** ***
The image of the fire arrow was found at Regia Anglorum, “They Didn’t Have Bows, Did They?”: http://www.regia.org/warfare/SaxonArchery.htm. Not simply pillaged in good Anglo-Saxon fashion but used by permission of Jon-the-webmaster. Our archer used a compound bow.
Posted by Marly Youmans at 4:00 AM