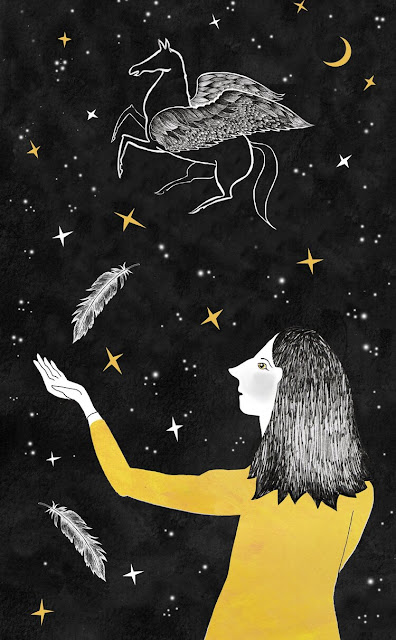 Once again, I have been terribly lazy about sending out. But thanks to Callum James (I met him some years ago in Wales, during splendid celebrations for the retrospective of painter Clive Hicks-Jenkins) for requesting some poems for the Spiritus Mundi series at Cunning Folk in the U.K. He was, for a short time, their poetry editor.
The lovely illustration above is by Helen Nicholson, who is an illustrator and musician in the U.K. You can find her here: https://helennicholson.co.uk/. She also has an Etsy shop for her prints.

Here are some three-line openers/teasers that will surely make you fly through the aether and land ever-so-daintily on the Cunning Folk cloud:

and from "The Horse Angel"

Heaven and earth are like two hands that touch,
Clapping together when a thunderbolt
Rives the air and melts the sand to glass.

I also have a short story titled "The Horse Angel." It's in the 2009 Postscripts (U.K.) anthology. Suppose I need a horse-angel essay next.

In related news, I'm saving the tweet below because a.) Dan Sheehan always deletes his page and b.) it is my favorite tweet of the month, and I shall look at it when I feel blue about having yet another novel come out during a disaster. (However, surely the universe will find that three disaster launches is enough... Then again, maybe not. There may be some reason behind my terrible timing, some thing I simply don't get. Offended a minor demon. Insulted a child. Tripped over my own words.) The Sheehanian comment is evidently referring to the Cunning Folk poems in particular, but I feel cheered by the idea of having eerie powers, haha! At least in the realm of world-wielding... And transporting. And timelessness. Okay, I sort of love Dan Sheehan right now, though I suppose that is childish and silly. Compliments at the right moment are sweet. 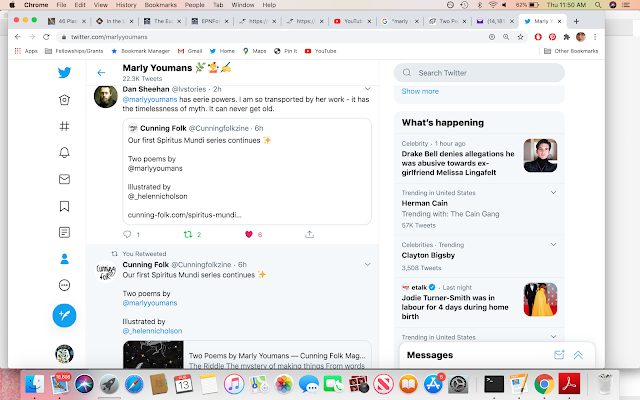 As I'm getting over a nasty g.i. bug (not The Bug), I shall now wave good-by! and go hug a pillow.

Posted by Marly Youmans at 8:11 PM