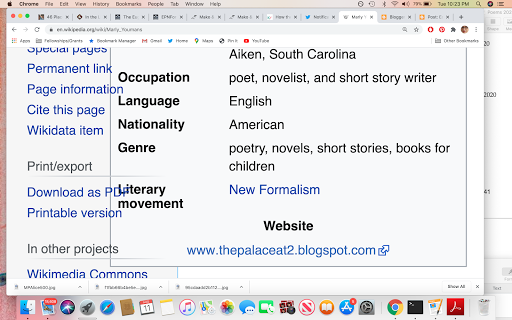 Among the many bothersome or dreadful things presenting themselves to my mind in 2020--global, national, and personal things--is the fact that Wikipedia still determines that I am a New Formalist. I noticed this claim some years ago. Perhaps many years ago. In fact, dear Wikipedia, I wrote you about this wee but annoying issue back in February of 2016.

But having accidentally fallen once more into my Wikipedia page by clicking heedlessly on a link, New Formalist glared out me from the little box in the upper right, even though I backtracked as quickly as possible. At the time (whenever it was) that someone made that minor yet preposterous claim, I hadn't the vaguest idea what a New Formalist might be. I certainly was part of no supportive group of poets. How can a writer be a part of a group or movement she knows nothing about?

These days, I know a good many more poets, yet I still don't know who might be regarded as part of this group that could have been supportive of my writing yet obviously was not. For I would have noticed--years ago--that I was well supported or even minimally supported by other writers. Might I have been a part of some jolly bunch of poets, sailing the seven seas in joy, and not have noticed? My dear Wikipedia, I very much doubt it.

You see, I've never been the least bit good at making "contacts" that might "help me." And I certainly was never embraced by a literary movement. A person notices when she is embraced, whether by a friend or a pushy stranger or even by a whole great big Literary Movement with capital L and M.

The only favor I can recall being done for my poetry was when the late Louis D. Rubin, Jr. asked to see my first poetry manuscript and then sneakily mailed it off to Louisiana State University Press. And they took it, the mad things! Once. I didn't sell enough copies of my first book to be loved by them eternally. If only I had been part of a Literary Movement, you are probably saying to yourself, my dear Wikipedia!  See, you almost admitted the truth there for a moment. But I don't think the book broke 400 copies, way back when. Unfortunately, Claire (I wish I had named it Snow House Stories and Other Poems, as I first intended) hopped around the press like the proverbial hot potato after its first editor took leave to take care of his ailing mother, abandoning my baby. Books need one consistent editor the way a baby needs one consistent mother. (I had two for my first six months of life, but that's another story.) I'm still grateful to Louis for surprising me with that submission. I'd give a great deal to have a chat with him, right now.

That's not what you mean, though...

Don't tell me. I could just look it up on Wikipedia, but I won't.

No doubt it's the pesky people who tired of the light constraints of free verse and leaped back into terza rima and sonnets and metrical lines and even rhyme. Like me, yes. But evidently they mustered together and created a movement. An actual Movement. Please do not tell me about it. I do not even wish to know. I just wish you, Wikipedia, to delete that bit of illusion, that claim with its air of importance. (Oh, yes, I,  I, I, belong to a Literary Movement. Nope. Never happened.) Perhaps the assertion rises to the level of the currently popular genre, fake news... Except poets are rarely news. I expect Ezra Pound was the last to provide anything we could classify as news, and that wasn't good news.

I may know people who think of themselves with that label. I suppose it is possible. But I don't know who they are, and I don't intend to find out. For me, there are good and memorable poems, and then there are the other poems. The latter no doubt are just as important to their makers as the good and memorable ones are to theirs. Some poems are mayflies, some are mighty Methuselahs. Hoping to catch the next poem as it streams through my mind (mind? spirit?) is what matters to me. I hope it's what matters to most poets (whether they write in form or in some Ivar-the-Boneless manner), though I have encountered poets who had something else entirely in mind.

So dear, sometimes-helpful Wikipedia, note this: People who write in form are merely poets. That's how it has been for thousands of years. And this person--me--who became bored by free verse* long ago is merely a maker of poems and stories, and not part of any movement. And that is all.

I expect you won't do anything about this. After all, it has been more than four years since I wrote you, and I still have this peculiar mark on my forehead. I'll try again in 2024, if the world and I last so long.

See you then!
Marly

*I should say that I do have a manuscript that you might call free verse... It combines influences from several distant traditions. Cultural appropriation, you might say, if you were unwilling to accept that the history of literature is a Silk Road, rejoicing in foreign spice and barter and ingenious theft.