Often I am asked about what it's like to work--I always think the verb should be dance--with artist Clive Hicks-Jenkins. He has illuminated and beautified my books for a long time now. I often thought of us as metaphysical twins (I can't remember who first came up with that thought) when we first tumbled into correspondence. The first year of exchanging letters was so inspiring! It's marvelous when you meet a person who inspires you and whom you inspire in turn.

But the image above relates to the sort of small, surprising occurrence that happens when I'm "with" Clive, even if he is across Atlantic in Wales. Sometimes we're walking around in our old houses--Clive's Ty Isaf and my Prentiss Cottage--and pondering each other's work. So magical! And odd things happen as a result. Unexpected elements coalesce. Some are tiny but curious. Like the bird in leaves. A few days ago I told Clive that I had a Pennsylvania Dutch hex sign on my bedroom door as a child that reminded me so much of this piece. That's perhaps not wholly surprising, as Clive is using samplers as inspiration, and folk motifs often have some commonality. It seemed an interesting linkage since there is a thread and threat of witchcraft in Charis in the World of Wonders. So the book secretly holds an image that appears protective to me. Of Charis? Of the reader? Of me?

And when I stopped overnight in Middletown, VA on my way north from North Carolina, I had an evening adventure related to the image. I was staying at the 1797 Wayside Inn and went out for a ramble. I stopped by an antique shop that was a log house (built by German settlers who raised eight children there.) Although it was already late, the shop was open. I picked out a few gifts. Outside was a passionate, pleasantly unruly cottage garden, and I learned that there was a bigger garden with winding paths and night-blooming cereus plants and lilies and much more in the back. Though it was growing quite dark, I asked if Crystal (she credited her husband with the garden's design) would show me their garden. The paths were lovely, intermittently lit by solar lamps and huge open moonflowers. And there in the garden I was surprised by a hex sign exactly like the one that had hung on my bedroom door--an image I had not seen in decades--so that a sudden necklace of images flashed into my mind, its beads pilfered from Middletown, Virginia and Cullowhee, North Carolina and Aberystwyth, Wales.

And I guess that's one part of the half-hidden secret of why we like to dance together. Somehow when I'm in a Clivean-Marlyan mode, congruence seems to increase, and not just a congruence of minds. Surprise happens: things happen that suggest that the world is a more enchanted, spark-lit, symbolic place than we commonly know. It's as if we are turning around a hidden center, that we live in a place of abundance. And for moments I'm more congruent with the deep shapes and patterns of the world, and I feel heart-struck and tied in spirit to someone on the other side of the sea. 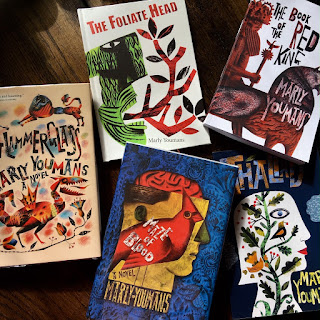 HERE's a poem that I wrote about dancing with Clive...

Novelist Midori Snyder asked me for "Praise for Dark Movements Toy Theatre" for the Journal of Mythic Arts. Although I write mostly formal poetry, I have a whole group of praise poems that draw on a Yoruban form and Hebrew parallelism, and this is one of that sequence.

The poem has the Mari Lwyd flickering in thorn trees and Yeats in the form of a silver bird and the Starlight Torch and Book of Moon and two friends in a white tent and lots of cheeses! And pie. And of course we dance. Enjoy! 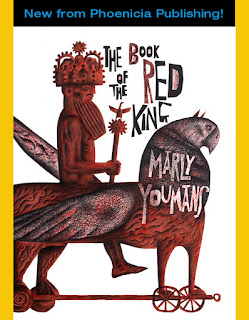 I've mentioned Charis, but I'm sure she wants you to be better acquainted with the Red King and the Fool and Precious Wentletrap! It's out there in our Wonderland with a BUY ME Alice-label tied around its pages. So why not skip lunch and support beautiful small presses like Phoenicia Publishing?

So strange to move quickly from summer lands to fall... Today the world looks even more symbolic and enchanted to me, a bright autumn sun streaming through dying red and yellow leaves as if through annealed glass.

This glorious and transcendent place
--George Herbert
Posted by Marly Youmans at 1:44 PM