A symbolic world and the children who played at slaughtering

A rather  peculiar post in honor of Shrove Tuesday

For various reasons--most of them deadlines--I have not been reading as much as usual this year. One thing I have been slowly reading is the Jack Zipes translation of the original collection by the Brothers Grimm. Many of these stories would soon be cleaned up or swept right out of existence in later editions. They are not romantic enough to suit the brothers, or else they are crude and violent.

Here's one that made me stop and reread. It has an oddly specific location, rather than a once-upon-a-time and far-away realm, that makes a reader wonder. Did the story have a source in life (a thing we can never know), and might it be the sort of oral tale that is symbolic, packed with compressed wisdom? (The second story under the title involves three dead children and two dead parents, but it is firmly back in the time and place of "There once was.")

How Some Children Played at Slaughtering
I 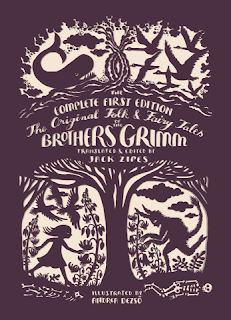 In a city named Franecker, located in West Friesland, some young boys and girls between the ages of five and six happened to be playing with one another. They chose one boy to play a butcher, another boy to play was to be a cook, and a third boy was to be a pig. Then they chose one girl to be a cook and another girl her assistant. The assistant was to catch the blood of the pig in a little bowl so they could make sausages. As agreed, the butcher now fell upon the little boy playing the pig, threw him to the ground, and slit his throat open with a knife, while the assistant cook caught the blood in her little bowl.

A councilman was walking nearby and saw this wretched act. He immediately took the butcher with him and led him into the house of the mayor, who instantly summoned the entire council. They deliberated about this incident and did not know what they should do to the boy, for they realized it had all been part of a children's game. One of the councilmen, an old wise man, advised the chief judge to take a beautiful red apple in one hand and a Rhenish gulden in the other. Then he was to call the boy and stretch out his hands to him. If the boy took the apple, he was to be set free. If he took the gulden, he was to be killed. The judge took the wise man's advice, and the boy grabbed the apple with a laugh. Thus he was set free without any punishment.

I've seen a number of commentaries on this, mostly brief, and they tend to suggest that this is a cautionary tale underlining issues of accountability in childhood. Some suggest that it is one of those tales intended for adults. I wonder. In a more primitive setting of a one- or two-room house, say, exactly how often were adult stories segregated from children's stories? How often today do we see children at movies that seem too "old" for them? Isn't it common, even in a home setting, for children to hear or see things that are meant for an older audience, big brothers or sisters or parents?

What happens if we look at a folk story like this not as simply a cautionary tale but as part of a world that sees all acts as important and events as symbolic? That's not the world most of us live in today, but it is what the world looked like to a great many people in the past.

The story gives us an image of sacrifice but a strange one: we have the perverse picture of a little girl of 4 or 5 catching another child's blood in a little bowl. In a symbolic light, the account immediately links up with another image of catching blood in a container. By the late 12th century, the Holy Grail was first depicted as a drinking vessel from the Last Supper. Moreover, Joseph of Arimathea was supposed to lift the grail at the crucifixion in order to catch Christ's blood. So we have a sacrifice, a major element in Western culture, where someone catches blood in a vessel.

Even though the child has done a terrible thing and so makes a very weird sort of analogy to Christ, the mayor's council and the confusion on passing judgment may also have reminded listeners of the arrest of Christ. There is a similar awareness of the little butcher's essential innocence. At 5 or 6, he is not at "the age of knowledge" as yet. So the councilmen feel at an impasse, all but "the wise old man."

In symbolic terms, who is the "wise old man" who offers the choice between a lovely round piece of fruit and a round gold coin? In those same terms, what is the choice extended to the boy? And what is the apple, what the coin?

The Solomonic wise old councilman stands in the place of God, offering two sorts of gifts to the innocent. The little butcher picks from "the fruit of the trees in the garden" in reaching for the apple. The gold coin he does not choose is allied to the fruit of the Knowledge of Good and Evil. Why? Choice of the round gold would disprove his innocence and mean his death, just as reaching for the fruit from the fatal tree means being cast out of innocence and into a world where death exists for Adam and Eve. So the gold coin is a symbolic object that conjures both the fruit and the intrusion of death into the lives of Adam and Eve but also the condemnation to labor in Genesis because we know that coins are the fruit of, the payment for labor. So the little boy, still acting in innocence, picks life over death. The lovely round apple is more alluring to him than gold, which some day he will have to earn by "the sweat of his brow."

Perhaps in a larger sense, the story put before medieval listeners the pain of death or the choice of larger life. Larger life in spiritual, symbolic terms would be found in the remembrance of Christ's sacrifice, the acknowledgement of sin, and the ongoing effort to choose rightly. In the words of the fourteenth century Wycliffe bible, "Behold thou, that today I have set forth in thy sight life and good, and, on the contrary, death and evil...  I have set forth before you life and death, good and evil, blessing and curses; and so choose thou life" (Deuteronomy 30: 15, 19.)

And on that note, a happy Mardi Gras, Pancake Day, Carnaval, and Shrove Tuesday to you!