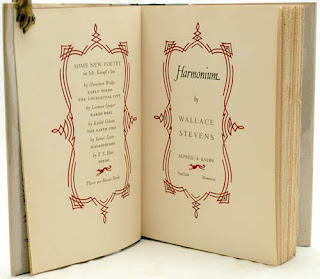 Here's a challenging-for-poets and intriguing-for-readers paragraph from Bruce Bawer's review essay about Paul Mariani's biography of Wallace Stevens. While I haven't read anything else by Bawer, I have a strong interest in approaching music in poetry--in the recovery of joy in sound play--and so his thoughts interest me. (The emphases in black below are mine.) He concludes:


We began with Frost and Williams. Of Stevens’ contemporaries, it was these two, above all, with whom he felt competitive, setting his preoccupation with the abstract up against their firm embrace of reality, of what Williams called “no ideas but in things.” But it was Marianne Moore to whom Stevens felt a real “kinship,” as he put it—which is scarcely a surprise, given that Moore, like him, had worked up her own rich, fastidious private language in poems that often resisted interpretation. (This, Stevens argued, was what good poetry should do.) As Mariani reminds us, it was, of all people, Williams—whose aggressive lifelong struggle to cultivate a plain, unreflective, “anti-poetic,” contemporary-sounding, patently New World voice continues to influence American poetry far more than Stevens ever did—who pointed out that, in the last analysis, readers are drawn to Stevens’ work not by his ideas but by the beauty of the language in which he expresses them; by, that is, the sheer music of his lines. It is, alas, a species of music that Williams himself fought against successfully—and that is, largely as a result of that effort, notable in most of the American poetry of our own day only by its near-total absence. Paradoxical though it may seem, in short, Stevens, while widely recognized as the greatest of them all, has not had anywhere near the impact on his successors that his inferiors did—which goes a long way toward explaining why American poetry today is so much less than it was, and than it might be.

And what do you say about that?
Posted by Marly Youmans at 1:41 PM