Midori Snyder on "Maze of Blood"

A pre-pub review pilfered from novelist Midori Snyder's In the Labyrinth, a great place in general, and also a great place to find a review of "Maze of Blood," labyrinths and mazes being kindred... Though near the end of the pre-pub period (pub date is September 1), the book is already available.

An Early Review of Maze of Blood by Marly Youmans 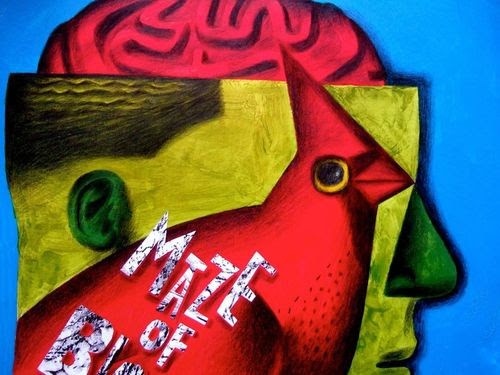 “In the end, he thought, a neat labyrinth or an untidy maze was a place that was simple. You reached its heart and were devoured by the beast, or you reached its heart and the spot was absolutely bare and pulseless. Maybe the beast and the blankness were the same. Maybe it was the emptiness that had teeth and hollowed you out.”
Marly Youmans' new novel Maze of Blood is a fictionalized biography of a small town writer, based on the life of pulp fiction author Robert E. Howard, noted for his stories of extravagant adventure as well as his suicide at thirty years old, coinciding with the death of his mother. For both Howard and the protagonist Conall in Youmans' novel, it is hard to imagine a more terrible beauty than a writer’s life imploding in a maze of contradictions: to be gifted with boundless imagination but compelled to remain rooted in the dry soil of a Texas oil boom town; to have a mother as muse filling his childhood with a love of poetry and epics, and then emotionally trapping him in the narrative of her own slow dying; to connect via mail to an admiring world of fans and writers, and to be marginalized by local friends disparaging his work as a worthless activity.
Youmans’ evocative prose digs deep into the visceral ache of living perched between sublime poetry and harsh reality, between the refusal to compromise a writer’s prodigious vision and the price paid in isolation and loneliness. The novel is full of mythic moments: Conall believes his imagination was formed at childhood when touched by the luminous fire of a falling meteorite. He is alive to the world when he is creating it, folding in history, poetry, and epics into his story telling. There is something heroic about the way he rejects anything in mundane reality that interferes with that passion. Yet, Youmans also reveals the darker side of compulsions, the siren-song of his mother, calling him to a love of language, but drowning out all other voices save hers that might have influenced his life in a different direction.
Maze of Blood is a difficult story, but one so beautifully crafted by Youmans, unraveling in short chapters like prose poems constructed from spare dialogue, the dusty Texas landscape, a sudden flash of vibrant nature, and the sweep of a starlight sky. The reader can not escape the tragedy of the story, but Youmans weighs it against the more powerful scenes of a gifted storyteller, whose originality and labors transcend the confines of his life, allowing us a chance to celebrate the writer's efforts-- and perhaps because it burned so brightly in such a bleak place, we value it the more. 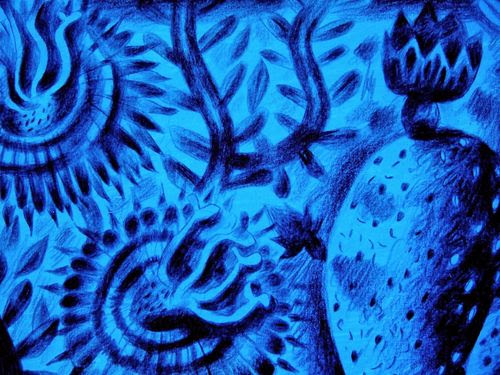 Maze of Blood by Marly Youmans is due out later this Fall from Mercer University Press -- with another handsome cover from Clive Hicks-Jenkins and design from Mary-Frances Glover Burt. Check out the tempting sneak peeks of the art shown above and below.
Posted by Marly Youmans at 12:45 PM