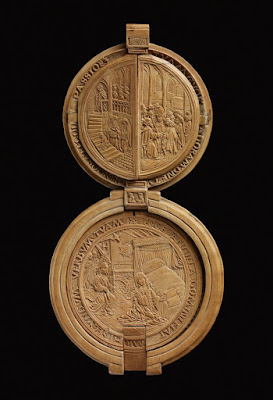 The Annunciation Carved in a Medieval Prayer Nut

Here's one of the poems I wrote for Phoenicia Publishing's Annunciation anthology, forthcoming in the not-too-far-off future. Being the sort of person I am (you can call that mad, or you can call it in love with making things and words), I wrote seven, so that editor Elizabeth Adams could pick one from a group. So this poem is not going to be in the anthology, but it is HERE, and also in the print version of "Books and Culture," edited by the most widely-read reader I have encountered, John Wilson. (The poems in the anthology will be: "Mystic Journey," "The Annunciation Appears in a Painting by Andrew Wyeth," and "Iconography of an Imaginary Medieval Painting.")

I also have a couple of poems in the just-out current (print, though I expect that issue 13 will eventually be up at trinacriapoetry.com) edition of Trinacria, edited ("by invitation") by the feisty, formal-poetry-defending Joseph Salemi. And those two are "Solitaire" and "In the Dream Behind My Eyes."

Photos: This is a sixteenth-century prayer-nut on display at the British Museum. Photo credit is unlisted at my source... though I'd be happy to credit more than the British Museum! If you want to see more prayer-nuts (they are fascinating) in a round-up of examples, go to My Modern Met. 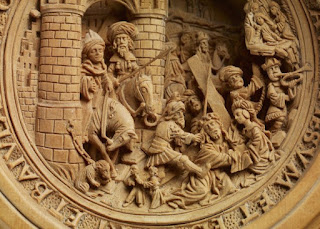 Lovely evening at the new Hamilton amphitheater behind Fenimore Art Museum, starting with a champagne picnic with shrimp salad and duck enchiladas and baguette and meringue cookies, followed by "Macbeth" with newlyweds (well, a year out--still new!) Michael and Danielle Henrici as Macbeth and Lady Macbeth. Must say that a pregnant Lady Macbeth adds to the drama of many lines. So fine to see a great play with Glimmerglass lightly wrinkled in the background and gulls flashing white against the hills.

If you are on Goodreads and haven't signed up for a chance at a signed copy of Maze of Blood, please do so! It's a short giveaway, with 330 people signed up so far. It helps spread the word, and some lucky person gets a free signed book and postcard.

Jacket copy: Begin with what seems the end of things—how Conall Weaver lifts a gun to his head. And now dive backward into the labyrinthine worlds of home, where Conall is the center, into the maze of love, where Conall seeks and strives with his soul-mate, and into the maze of imagination, with its population of weapon-wielding heroes and local-color Texans…and then on, into the maze of childhood, where time seems illusion and all the threads and stories start. Red for the blood of frontiersmen and Indians, Conall thought, red for the blood of proven heroes and mother, the martyr of Cross Plains. Maze for the looping coils of a snake that ended in a rattle that shook out revolutionary warning: don’t tread on me! Maze for veins of blood. Maze for family. In Conall Weaver, the mundane world and the wonders of the imagination collide and shoot out sparks. Inspired by the life of pulp writer Robert E. Howard, MAZE OF BLOOD explores the roots of story and the compulsions and conflicts of the heart in a Southern landscape. “Marly Youmans is a great writer. Her prose is immaculate.” —Laird Barron “Marly Youmans is a novelist and poet out of sync with the times but in tune with the ages.” — First Things “I cannot recommend an author more than Marly Youmans, whose fantastic prose is absolutely gorgeous and haunting.” —Seb Doubinsky