Poets are the unacknowledged legislators of the world.
--Percy Bysshe Shelley

What a silly, Romantic thing to say!  Just the sort of Shelleyesque thing that Shelley would go and say, don't you think? I suppose all poets have lived flawed lives--don't we all?--and all have occasionally said a silly thing, but poor Shelley has been more mocked for this line in A Defence of Poetry than all the rest, I imagine.

Imagine the dust of Plato whirling about in distemper: this Shelley fellow was neither moral nor patriotic, and he had a positively smarmy view of nature! Poets certainly had no business setting themselves up for legislators, when they did not even belong in a republic anyway... The dust of Aristotle rather likes nature. Meanwhile, what's left of Horace agrees with Plato; this Shelley fellow has no moderation, no sense of what is fitting or what he owes to his family and his country. They've got a point: poor, poor Harriet.

Poets are the legislators of the the unacknowledged world.
--George Oppen

Witty. It's a betterment of the original, though really depending on it to have any sense or wit.  Plato is still rolling dust, still upset about upstart legislating poets, though maybe he feels better about the "unacknowledged world," which may be the ideal world, after all. But poetry is not the ideal world nor the natural world but some third realm, of course!

What would be better yet?

Far from being its legislators, poets dream the unacknowledged world.
--me

Still dependent on Shelley. Perhaps it wouldn't be interesting at all without him. It would just be something else and perhaps commonplace.

Nevertheless, I offer the dust of Longinus a cup of tea, and we have a nice chat about the sublime in art.

Now you try tweaking that line! 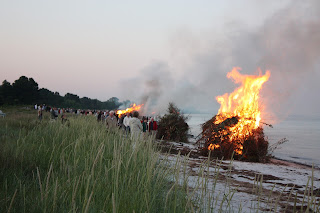 Got home from camp-ferrying about 7:30 p.m. last night to find Crazy Mountain wild sheep vindaloo bubbling on the stove.  Now that's rather unusual.
Posted by Marly Youmans at 8:00 AM