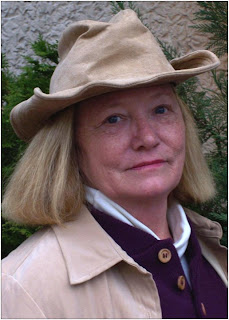 Here’s a lovely guest post by South Carolina writer and historian, Suzannah Smith Miles, from Charleston, South Carolina and Gettysburg, Pennsylvania. Suzannah is known for both her books and magazine work on North and South Carolina history, and she writes regularly for Charleston Magazine and WNC (Western North Carolina) Magazine out of Asheville. Known for presenting history in a light conversational style, Suzannah has been called “the best armchair historian in the state of S.C.” This piece was originally published as one of her weekly columns (a ten-year run) for The Moultrie News in Mt. Pleasant, South Carolina. Her current book project is A Sea Island Gazetteer (projected publication date Spring 2012), comprising an A-to-Z listing of people, places, and events in the history-rich coastal area between Charleston and Hilton Head."


﻿ ﻿ “Maybe I have already done it,” ponders a character in William Faulkner’s book, Light in August. “Maybe it is no longer waiting to be done.”
August is here, my friends -- that curious, pivotal and delicious time of the year when summer still reigns but we begin to feel the unmistakable touch of autumn. It shows in the sassafras leaves which are beginning to change from green to russet and orange and fall in my backyard. It shows in the pecan trees which are filled with large green, leathery nut pods. It shows in the fields and roadsides, where a month ago wildflowers were in full bloom but now are “thighdeep in dusty weeds.” As we turn our thoughts from vacation trips and days on the beach to book bags and school clothes, we think, “Where has the time gone? Is it August already? But, it was just the Fourth of July!”

Yes, August is beginning to show. The seasons are beginning to turn. There is that unmistakable something in the air. And, more than anything, there is the August light.

There is a distinct, airy and almost delicate quality about the light in August. The sun is beginning to nestle into its wintertime position, casting angular rays which diffuse and brighten the depth of the landscape of late summer green. The marshes, at the height of their maturity, shimmer and gleam, and the spartina moves in the wind like an undulating cape of emerald velvet.

There is a mellowness that comes with August light. Faulkner described the August sun as “a prone and somnolent yellow cat” watching the “slow flowing of time” beneath him. Time does seem to flow more slowly in August, especially during those periods when it is unbearably hot. August appears to drag on interminably and its thirty-one days feel more like thirty-seven.

Augustus Caesar stole a day from February to give his namesake month of August thirty-one days. This decision was not based on any astronomical purpose but from simple petty jealousy. Augustus thought of this month as his “lucky” month, for it was in August that he scored his greatest military achievements and first became a consul of Rome. He didn’t want July, which was named for his uncle, Julius Caesar, to be longer than the month that carried his own name.

August is a month of yellow days, days when the ocean border is commanded by tall, white cumulus clouds which march across the tropical horizon like sentries at their post. When the early morning sky is washed with saffron and the light bleaches out darkness with the color of sand. When the late afternoon setting sun deepens the earth into shades of copper and orange, and the sky is fringed with sweeping cirrus clouds tinted with turquoise, ruby and sapphire.

The old ones called these clouds “mares’ tails” and saw them as a sign of the approaching season of tropical storms. “Watch-em. Mares’ tail fill de’ sky,” warned my friend, an Edisto Island Gullah fisherman who has long since gone to his heavenly home. “Mares’ tail mean big storm a-comin,’ he would sagely predict as he pointed to the cirrus clouds above. And sure enough, if it isn’t a “hurricane bin come,” whenever sweeping curls of mares’ tails dominate the sky, some sort of tropical system usually passes through within the week.

August is the month of four o’clock thunderheads, forming in predictable mountains over the western horizon almost every afternoon. Charged with electricity and heavy with rain, they change the temperature from broiling to steamy and wreak havoc on the motorist during the rush-hour drive home.

August is the month of sweet, fleshy mountain tomatoes; of okra which has grown too large to be good for anything but stew. The month when blue crabs are at their fattest and saltwater fishing is at its best. When shrimp are plump and full, and the shrimp boats come into the harbor trailing a smog of seagulls hungrily diving, bobbing and working the wake as they feast on the leavings tossed aside. 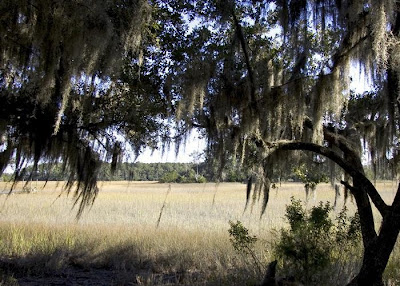 August is a month of excesses. A time with days too hot and storms too fierce. When fogs of mosquitoes clog our twilight yards. When people with sanity decide to remain in their mountain cabins for “just one more week.” When the rest of us wipe the sweat from our brows and yearn for September, hurricane season be damned.
August is the month when we watch the impatiens wilting in their beds and try to decide whether we should water the flowers now or wait for the late afternoon thunderstorm. When we see that the grass is ankle-deep and sigh, “but I just mowed four days ago!”
And, like Faulkner observed, August is the month when we ponder whether we did the things we set out to do, or whether they needed to be done in the first place. We go from “should I” to “did I” with a simple rotation of the earth’s axis.
This is the month of August. It is bathed in exquisite, glimmering light with days awash in the colors of lemon and cream. It is a time when we see the summer crops come to their peak -- and then pass on. It is a month of Sundays, when we can almost feel and touch time as it makes its steady and unwavering advance towards autumn. August. Yes, this is August.
Posted by Marly Youmans at 12:02 PM