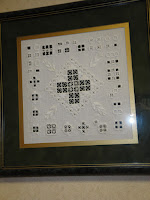 Sometimes you are surprised to find evidence of someone you know in unexpected places. It's an odd sensation, the pleasure a little like meeting a friend unexpectedly. I had a longish ferrywoman's stint yesterday, picking up my son at Beaver Cross Camp, and made a discovery. 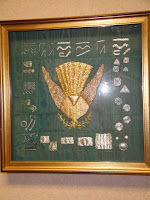 The camp used to be on the shores of Lake Otsego and only twelve minutes away from home. The cabins clustered close to Ringwood Manor (1900), once one of the three home belonging to the Arthur Ryerson family. If you watched Titanic, you may remember that Leonard DiCaprio pilfered a coat belonged to one Arthur Ryerson. (I don't remember it because I haven't seen it, but you might.) Mr. Ryerson died when the ship went down. He and the rest of his family were heading home from Europe because they had received news of a death in the family. 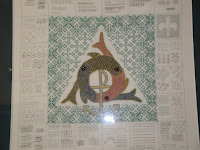 When the camp moved east of Saratoga, N was still loyal; he has gone to the camp since he was a pre-schooler on his first overnight adventure. On leaving the dining hall, I stopped to admire a group of ecclesiastical samplers, only to discover they were by Swedish-born needlewoman and longtime Cooperstonian Karin Svahn, still resident in the village during the summers.  I'll list the types of samplers in the captions to the photographs, so that if you are curious you may google the names and fin out more.

I thought particularly of the cloth ornamentation in paintings by Clive Hicks-Jenkins. I wish he could have taken a good look at all the interesting stitches! And when I see this, I feel a little regret that I did not keep up with the sewing my mother taught me as a child. At 82, she is still a grand needlewoman (and gardener and much else) and has recently bought a new 4-harness loom.

Posted by Marly Youmans at 4:42 PM