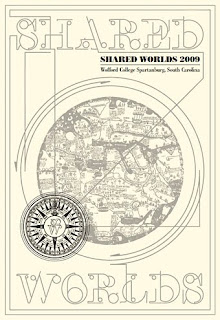 Jeremy Jones, the director of Shared Worlds, has sent me a couple of questions to answer by Tuesday . . . Evidently they will be linked up both to Jeff Vandermeer’s Booklife site and to the Shared World online resources—something like that. (I'll be visiting Wofford for Shared Worlds in July.) So I’m going to fool around with answers here and let them age a day and redo them before I send them off. Unfortunately, I have a terrible memory for just this sort of topic. Perhaps that’s fine; only the big things will stick.

What is the worst piece of writing advice you've ever received? And how'd you figure out it was bad advice?
I’m not very fond of the advice “write about what you know” because I think it’s too bald and not nuanced enough. Aren’t we always writing about what we know, whether we are writing about another universe or an Anglo-Saxon mead hall? We can’t get away from what we know, no matter how we try.

But I would rather talk about the worst advice that turned out best. One day when I was teaching—I quit teaching as soon as I got tenure and promotion, being of a contrary turn of mind—one of my colleagues said to me, “What does the world need with another poem?” He had no idea of such a question meaning anything to me at all. It was a joke, and I knew it was a joke. But you see, I was a poet until he said those words to me. Then, abruptly, I could not write a poem. It stopped me up completely! So it seemed, indeed, “bad advice.”

Because I could not see how people live without making things, I had to do something else. On the weekends I began writing stories. A year later I was writing a short novel. I was no longer a poet but a writer of fictions. One day I committed a poem—I was a poet again. But something marvelous had happened during the time when I could write no poems. Writing fiction had changed me a great deal. It seemed to me that all my prior poetry was simply too small. I wanted the new poems to be bigger. Sometimes I wanted them to tell stories or to be dramatic. At the same time, I wanted the poems to be as different from fiction as possible, and I picked up all the old tools that I had been advised not to use—the things that we were too advanced to use anymore—like meter and rhyme and delightful, puzzling forms.

Now I move back and forth from poetry to fiction and back again. Each changes the other. Each brings something to the other. The world is always in need of another story or poem—a living story or poem—even though the world does not know it, for the most part. And that is fine with me.

What is the best piece of general writing advice you've ever received? And how did you put it to good use?

The advice I frequently give is to finish what you begin because you learn a great deal by forcing yourself to finish a thing, no matter how ill it looks to you! Solving problems by doing is the only way to move forward as a young writer. “Finish” is advice I dole out often to my daughter, who is a teenage writer and artist and much more.

But what is the best piece of advice that I’ve ever received?

I was a maniacal reader as a child, so it certainly wasn’t advice to read. That is good advice if you’re not much of a reader, but how could you desire to become a writer if you had not been a reader? Every writer has been mad to read at some point.

Writing every day is excellent advice, but I don’t do it. I doubt any mother with three children does.

Probably the best piece of advice I missed entirely was when poet Michael Harper told me with an air of surprise that I was quite good with form. I had tossed off three or four formal poems for an exercise, and everybody else in our group refused to write any at all. If I had taken Michael Harper's remarks seriously, I might have discovered something about myself and what I loved that took me years to find out on my own because I was under the thumb of what the world said was the thing to do.

But you ask about the best piece of advice that I took and used.

“There are no rules that can’t be broken.” I’m sure somebody said something like that to me early on, and it is true. Rules have a kind of fascination for us. We welcome most the ones that seem like something we already believe or do. We enjoy the silly or odd ones. We ignore the rest. But there is almost no important rule that cannot be overturned. (Some of the seemingly minor ones like not overusing adverbs or using complicated dialogue tags like “he gargled through a mouthful of hot soup” are impossible to overturn except in the case of comedy and satire.) I wonder what the biggest rule that I have broken might be. I tend to be violently allergic to doing the same thing twice, and that is precisely what many publishers want us to do: the same thing twice. Or thrice. Etc. Perhaps that is my broken rule.