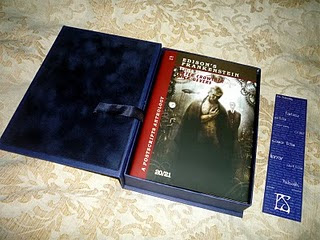 The picture at left is nabbed from Cate Gardner , who says that I have "the most gorgeous signature in the known universe." That's an unusual subject for praise, but I thank her. (Go to "A Little Man of Letters" to find out the truth about my once-horrible handwriting.) Catherine J. Gardner has a story in the anthology, Edison's Frankenstein from P. S. Publishing. That is her very own copy, lying on what I presume is her very own bedspread. I just got my big fat signed-and-slipcased copy only a couple of minutes ago so I haven't read hers yet. My story, "The Horse Angel," is on the Locus Recommended list for 2009. There's a longish discussion of it at Tangent. I notice that Tangent picked "The Red King's Sleep," another story of mine from a P. S. Anthology (Enemy of the Good), for their 2009 recommended reading list.

Monday in truth and metaphysically

I'm ransacking the house for documents lost after a trip to the DMV. It's definitely a Monday. Since I wasn't along on trip or return, I'm just looking everywhere... Meanwhile I just got a letter that I was a semi-finalist for the Donald Justice Poetry Award. That's a book award for formal poetry from the West Chester University Poetry Center. I would have preferred to win--hate that bridesmaid feeling. But I haven't submitted to a book contest in years and probably won't again. I don't really care for contests. More of that Monday feeling. No doubt I shall enjoy the books by the two winners, Ned Balbo and Amit Majmudar.

I'm starting to look for early fall events for 2011's The Throne of Psyche (Mercer University Press), so anybody who wants to put an event on my dance card can write me at camellia [at] marlyyoumans.com. If I don't write back, you were eaten by the filter and can leave me a note at facebook or here. I'll be doing readings or talks at bookstores and other places--will visit local groups under certain conditions.

In 2011 and 2012, I'll have two more short novels out from P. S. Publishing in the UK. One is Glimmerglass. Despite the fact that I have not lived in Cooperstown for the requisite thirty years, I have once again written a book related to the place, although it is more related to some of the stories I have written about it. Glimmerglass plays with the fictional quality of Cooperstown--this weird place where people regularly talk about Cooper's fictional places, where we have our own lake monster, where we have Kingfisher Tower in the lake and a Norman tower in the woods, where the line between fictional and real is a little frayed. This is a story about an unmarried woman at mid-life who considers herself a failed painter but who has a kind of resurrection in this landscape. I've imagined her living in a charming old gatehouse near the Fenimore Museum. There is an embodied Muse, a flood, a house that leads into a hill, a labyrinth, a love, the possibility of murder, and much more.

The other book is Maze of Blood, a nice pulpy title for a short novel inspired by that unhappy writer, Robert Howard. He has an "E." in the middle, but evidently the name is trademarked! I've long thought his life fascinating in its peculiarly Southern frustrations and limitations, and I understand the place and time--it feels so kindred to my summers in Georgia as a child, moving from a sharecropper's flimsy house to a romantic Queen Anne and back again. I also feel that I understand his nature, having spent much of my life with people who are neurologically interesting, as he appears to have been.

And I ought to say thanks to Pete Crowther and Nick Gevers for pursuing my work. I adore being asked and of late have had the fun of more requests that I can fill.

In which I write Botendaddy

My attention has been drawn to this amusing note on my Wikipedia page under the "Discussion" tab. I didn't know there were discussion tabs, so this is interesting.

"Borderline but sufficient notoriety to be included as an entry. I do object to inclusion on the [[Cooperstown]] entry as it implies that she is a Cooperstown Writer. This is a very elite group and requires Upstate New York essence and authenticity. She may be an accomplished interpeter of the Lousiana experience and an excellent writer, but mere residence in America's greatest village does not qualify one as a Cooperstown Writer without more objective criteria to support this contention. With great respect and kindness...the Botendaddy.[[User:BotendaddyBotendaddy]] ([[User talk:Botendaddytalk]]) 20:33, 9 September 2008 (UTC)"

Well, somebody pointed out this curious note to me! The fact is that I published a novel set in this area as far back as 1996 ("Catherwood" from Farrar, Straus & Giroux) and that I have published many, many stories and poems with a Coopertown setting. My tenth book will be set in Cooperstown. Botendaddy, you loyal native son of Cooperstown, I'm afraid you know absolutely nothing about my work. I have published precisely one short story about Louisiana. And having looked up your comments on Cooperstown-born writers, I would just like to say that you do not have to exclude another writer in order to praise the native-born one you would prefer to put forward. There is room in the village, in the round world, and in the great sea of words for many. In fact, it is precisely because we are many that the sea of words becomes rich and bright.

As I've had a request for a book of poems, I imagine that will be my next announcement, bookwise.
Posted by Marly Youmans at 12:00 AM