A Shiver in the Curtain of the World 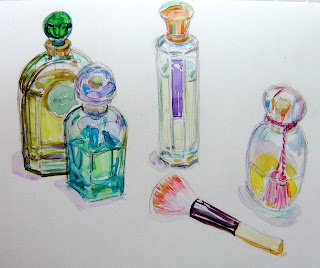 A few weeks ago, a salesman popped through one of the side entrances of the palace—a dark, Poesque little tunnel with aphorisms taped to the cobwebby walls—and tried to sell perfume and mineral makeup and motorcycles and assorted whatnot. I told him that he was not allowed to sell here, and that a footman would accompany him to the nearest door. To comfort him, I sent the footman in mineral makeup and an attractive perfume compounded from a lost buttercup and the remains of an exploded star, and I had the Pot Boy (who was standing around looking decorative and useless) wheel a beautiful motorcyle, sweet as perfume and as shiny as a bottle, to meet him at the door. Attorney Clendon had not yet vanished, and so served him with a writ; the salesman named Eric may not return in the guise of a salesman, although he may drop by for tea and books.

The infinite library of the web has shifts the world and set things askew. We have entered the world of magic. I say that I have a footman; he promptly appears and escorts my visitor away in an excess of politeness. He is an under-footman. I suspect that he wears mineral makeup because his skin is bad, although he is good-looking in a Jaggerish sort of way—the so-ugly-he’s-cute mode. Mack is his name. Mack the footman. I do not think that Mack is his real name. His pants are creased a little too sharply and fall without even the merest little twitch of a wrinkle. I am afraid that he is ambitious, but for what I do not understand. If I knew fully, I might be a little afraid.

Now don’t these unexpected encounters rock the world, just a little bit? The line between real and unreal, technology and magic is abraded and grows shadowy. Won't people quickly grow accustomed to this dreamy zone between what has been called real and what has been called imaginary? And won’t literature be changed because of it, for good or ill? Strange elements are seeping into the mainstream, sweetening or poisoning the waters that have long run the same, the very same.

Perhaps we will at last swim out of the fishnet of Modernism-and-after, into the deep green veins of the river. And there we may find ourselves more ourselves, though more strange. We may even meet the dreams of the past made fresh and new--Beowulf's monster, the Green Knight, Arcadian shepherds, and Mary with the sweet Medieval dew dropping onto her thigh.

***
The perfume bottles are courtesy of Laurelines.
Posted by Marly Youmans at 4:00 AM