The Chamber of Cloud and Tears 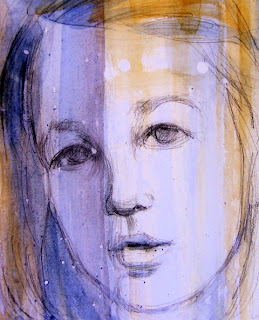 For those of you who pop by frequently (commenters and lurkers alike), you may like to know that two people featured here in the past few weeks are in mourning. We rarely wear a black band on our sleeves these days; the 21st-century mourner announces a death on his or her blog.

"Susangalique" has suffered a great loss. Her father died unexpectedly. A message left at her blog reads: "Susanna's father passed away last night. His life was a grand adventure, and like all good books, his story was a story that one never wanted to end. Please keep Susanna and her family in your prayers as they endure this difficult time."

I picked Susanna Leberman--susangalique--for the first interview in "I Interview My Visitors," and many people were charmed and entertained and moved by what she had to say.

A few days ago Clare Dudman's mother-in-law began to ebb while Clare was off doing a talk in Hull. She died not long after Clare returned home. Clare also appeared in these "pages" recently, because her novel, 98 Reasons for Being, was the first one featured in my Long Grass Books series-in-progress.

I'm always glad to see the name of either woman--the aspiring historian and vim-filled Alabamian or the Welsh novelist whose words I admire--on a calling card in my little e-palace. To each, much strength and sympathy, many aerial bouquets of snowdrops and cloud.

The blogosphere is a cunning little world, made of something and nothing and people. A distant fall in the web can touch us across the world.

***
I chose the lovely face above because it struck me immediately as a one seen through distances of time. Let it stand as an emblem of memory.

It is unmistakably a picture by Laura Frankstone Murphy, this time of her daughter C as a child. Thanks to Laura for the image.

THE OLD MEN ADMIRING THEMSELVES IN THE WATER

I heard the old, old men say,
'Everything alters,
And one by one we drop away.'
They had hands like claws, and their knees
Were twisted like the old thorn-trees
By the waters.
'All that's beautiful drifts away
Like the waters.'