In the Realm of the Mouse Warrior: Jeff de Boer 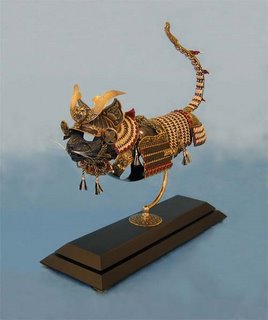 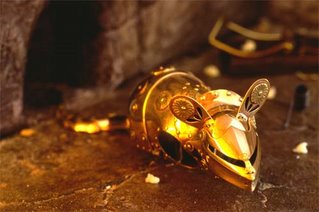 Jeff de Boer is a one-man refutation to the sometimes-voiced idea that Canada is boring and staid (Not by me—Canada and I are pals. Vancouver! marvelous Montreal! Quebec City! I am a fan of even you, Ottawa, despite the fact that you infected me with a powerful alien snow virus during your winter festival.)

Jeff had a tinsmith father and made his first suit of metal armor in high school. In art school in Alberta he made his first suit of armor for a mouse. (Did I say that I love obsessed children? I do, having been one—and I am a mother. I have met obsession again in my own children.) Jeff has made many more mice-suits since then. These are not visual puns but elaborate “parade armor” that contains little crooks and corners and sweeps of beauty. No doubt those tiny internal gestures led to his later Exoforms, just as the playfulness led to his ray guns, rocket lamps, and large scale play and flourish.

In an alternate universe, these suits would be and perhaps are treasured by warrior mice—just as his samurai armor for cats would be and perhaps are coveted by those mighty mouse-hunters, the cats. One glance at these cunning, lovely little objects lets such a world spring into active life. Every year the maker is drawn to design a few more. In another realm, it is 2:00 a.m. and small wizardly mice are sending all their most wizardly thoughts to this one, shedding them onto Jeff de Boer. Surely he will make another under their spell, more surprising than any seen before!

His armor for executives transforms this world, reminds us of the small hammered links to the past. It reminds us that ordinary people, too, are engaged in battles and the over-toppling of kingdoms. The scabbard case, the catapult, the ringing metal of the tie stop the clock, break in and throw a bolt into the workings of the daily grind.

I like these things because they are surprising and finely crafted and show a sensibility at play and work. Further, I like them because they show how absolutely wondrous it can be to be a human being—deeply involved, in command of one’s tools, a bit quirky and frolicsome, springing forth with new ideas.

The mouse and cat armor pictures are from http://www.jeffdeboer.com/. As his email doesn’t seem to be working, I have basely pillaged the armor images, in the manner of a large feral cat from another universe. Also in the manner of a delicate, fierce, otherworldly mouse. Do not try to excuse them. They were barbarian warriors and had the need.