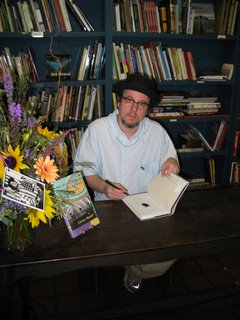 On Tuesday, May 23, you may read COREY MESLER
& THE FALL FROM PARADISE INTERVIEW at Sue Henderson’s PublishersMarketplace blog. In it, “Marly Youmans talks to writer and bookseller Corey Mesler about the golden age of bookselling, his more than 30 years in the business, 9/11, the internet, book-browsing, Memphis, human nature, Fredric Koeppel, love, and destiny.”

This one will be a funny and sad interview, well worth perusing for book lovers. It has already made one reader "tear up," though only one reader has read it so far... See the little guys at the independents tilt (and sometimes fall) against the big guys.

These days, writers can't afford to ignore the behemoths of chain and online bookstores, but we really hate to see an independent bookseller lying wounded and bleeding by the side of the road. Let's keep some places where bookstores are governed by a local bookseller's passion, where local writers are supported by community, and where good books stay on the shelves after the "3-month window" (probably down to 2 by now!) for a new book closes.

Youmans:
Last week I wrote, “Besides, you have to love a guy like Corey Mesler who would be so astonishingly foolhardy as to be a poet, a short story writer, a novelist, and a bookseller. That's somebody living on the front quad of risk! Then there's Cheryl, bookseller, mother of two, spouse-of-Corey: undoubtedly among the intrepid of this world.” It seems just as true this week. Despite Walmart and bookstore chains and web stores, you both go on striving to make a little world that words in good order and people can inhabit together. In the face of havoc and hard times, can you say something about why you chose such a life—why you choose it still?

Mesler:
It chose me. When I was 18, a mooncalf, a dope, I didn’t know anything about books. I didn’t even know that they came out in hardback and then a year later in paperback. I didn’t know Updike from Upjohn. I didn’t know Proust rhymed with roost. So, why was I led to apply at my neighborhood Waldenbooks? God thumped me on the back of the head, and said, here, mooncalf, here is your destiny.

Oh, and, thanks for the love.

For those who ordered Raven Mockers during the promotion: the Ravens are still flying from the nest! I know, I know, but I ran out of cute little boxes! I suppose one has to suffer a bit for a bargain--at least, if it's my bargain.

I got punchy doing inscriptions and wrote James Simpson some hortative doggerel from the Witchmaster on his book. Jim, you have a unique copy! As for the rest of you readers (and sometimes budding writers), you may find all kinds of weird things (feathers! eggs in nests! ridiculous comments!) on yours if I inscribed it on Friday night. Afterward I dropped into bed at precisely 2:00 a.m. and dreamed of the Palace. (Okay, that's a fiction. I didn’t, so far as I know, but it sounds right. Might've.)

Something marvelous has happened in the book world. N, age 8, has fallen utterly in love with a book. He found it in the ongoing Library Sale box at Huntington Library in Oneonta, and it is--drum roll, ta da! and confetti--Marjorie Cowley's Dar and the Spear-Thrower (Clarion Books, 1994), a novel about a Cro-Magnon boy living in southeastern France some 15,000 years ago. He checks traps, climbs for healing plants, receives the tribal mark of manhood, meets a stranger, ventures to another tribe, learns to carve and use a spear thrower, and makes peace with a difficult uncle. And one little boy is deep in the wonders and perils of the past.