from the Forest of Blue Leaves 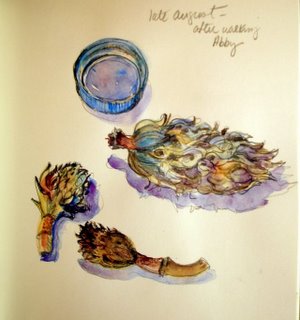 These magnolia pods made me feel homesick. It’s bright enough outside, and snow and shadows are lovely, but I want to go home and be warm and see flowers and eat my mother’s cooking. If you aren’t bred for this place, it’s hard to survive January and February without falling into the realm of snow-shadows and being covered over by their strange blue leaves.

A penpal of mine from Athens—Georgia—is going to quit the teaching of creative writing and to stop his blog, at least for now. (That’s Phil, who was tagged and wrote his response to the Five Weirdnesses as a "comment" to the previous post.) I’ve always felt that deliberately putting a stop to things is one of the essential acts of life—and especially putting a stop to things that appear very important to other people. I imagine that Phil will write more books and more music and do some carving in alabaster—all sorts of fruitfulness—with the time he gains. Sometimes it’s good to be a hermit and retreat a little, in order to find other satisfactions.

So now I am wondering about my own blog… It’s a strange little missive to the world, or to whatever pieces of it are attracted like filings to a stray magnet. I get occasional letters about it that are pleasing, but often I feel that I’ve simply tossed a bottle (green, with a high punt and lots of bubbles) into the ocean of e-aether. Then I check my stats and wonder who these people are—who you are—someone fell from a great height into the ocean and grazed my green glass bottle and hurtled on through the sea of aether?

I’ll have to think about it. To blog, or not to blog… That does seem in question these days.

Another writer penpal of mine wrote yesterday and confessed the various barbs and hurts she had felt lately, many of them courtesy of the web. It's strange what the aether contains and what it unleashes, good and bad. Every Jack is a reviewer now--and writers need that word-of-mouth reporting when so very few books are "pushed." Yet every Jackass is also anointed and given a cap and bells to shake in the public square. (It's confusing, because the writer in me is curious about them both.) So I wrote back and reported on my own humiliations, just to cheer her up... To be a writer, one must keep a soul that's tender but wrap it in hardness, so that glass hammers strike against a mine of diamonds.

To my astonishment, I just saw a book by a third penpal of mine at The Great American in Cooperstown. Buried in a mass of dreck discount books was the hardcover of Howard’s The Year of Jubilo, shining like an emerald in a trash heap. I picked it up and was going to buy it, then decided that I’d rather someone else find and read it, since I have a copy and a new reader is always desirable. So I left it there for somebody else to pluck up a treasure and took home chocolate, oxydol, and a pair of pink and red Valentine huggy monkeys for my youngest, who is sentimental about cute things and is always setting up zoos and pet stores in the center hall. I wonder who will take home Howard’s book? I’ll have to check and see if it’s there, next time I pass by. If a book makes it to a village of a mere 2000, it’s a signal event. It's about as strange as if a book comes to mooring in a village on the other side of the world.

Credits: The magnolia pods are from Laurelines
(http://laurelines.typepad.com/my_weblog/),
a site by Laura, an altogether interesting person
who is pursuing the lovely will o’ the wisp of art
to gain "the silver apples of the moon,
The golden apples of the sun."
Creative Commons License.
Posted by Marly Youmans at 12:32 AM