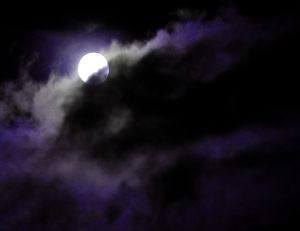 On Sunday night I felt chilled and heaped a comforter on the bed—an enormous billow of down. I finally got warm, snuggled against my husband and under that warm snowdrift. About three in the morning, N. woke up and came running into the room and hurled himself onto the bed. By the time he wriggled under the covers, I was quite warm and woke up enough to thrust the comforter lower on the bed.

Later I woke up sweating, with N. clamped around my neck. I'd been dreaming that a strange, ugly animal had gotten into the house. It had attacked our chocolate lab; her severed head was lying on the kitchen floor. It went on to kill Theodora, the calico, and Lady Azure. In keeping with her utter sweetness and lack of personality, the blue Persian was only a tiny handful of fluff and so was destroyed by a single bite. My children were standing around, all three looking younger and smaller and wholly vulnerable; I cornered the beast—it seemed to be some sort of wild dog—and forced it into the oven. My husband appeared and helped me at some point during the awful struggle. And then we held the glass door shut and turned the knob to “broil.”

All of that makes a kind of sense: the bed was an “oven”; mother dreams run easily enough to fears about the fragility of children. I leaped out of bed about 6:45, feeling sand-bagged but glad to be released from sleep, and started prodding my children to progress toward being clean and shiny for school.

As I was bending over my youngest, who was putting on his socks, he looked up at me and said, very slowly, “Is there another animal in the house?”

“No,” I said, the hairs at my nape prickling.

I changed the subject but came back to it in a few minutes. “Why did you think so?”

He didn’t have an answer, but I still retained a sense of the uncanny long afterward, and I jumped in surprise when I found Hanna-the-lab just behind the basement door. I didn't talk about the dream, because it bothered me. Yet it managed to linger. At dinner, when N. was trying to decide if a dozen was a lot or a little, R. told him that 12 bites from a wild dog would be a lot...

In the back yard, the gigantic limb-dropping ash tree tossed its limbs and threatened fall. The ice-flecked wind thrust itself against my children’s bodies, hurling their scarves in the air. Gleaming, the rows of fruit-filled canning jars in the pantry met my eye, saying I never met a bacterium and Eat Me. There’s always, always, always another animal in the house, waiting in the walls and slavering in anticipation of a coming day and biding the sweet, sweet time.