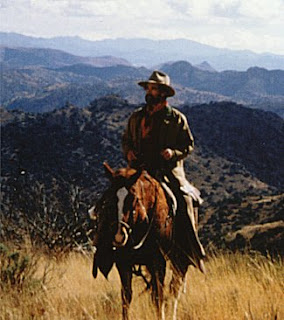 Templeton is James Fenimore Cooper's literary name for the village of Cooperstown, and I often use it to refer to the place in a story--particularly when I write about its more 'fantastic' aspects.

Templeton continues to be a queer--in the old-fashioned sense--and revelatory sort of place. I've been meaning to write about a sort of writer's adventure that happened recently. It started in an ordinary enough fashion; my husband called to say that we'd been invited out to dinner by somebody he'd met several times through work. I was a bit tired (three children and their events) and didn't especially want to go. There was a wrinkle; we were to bring not only the children but the dog.

This seemed a little curious.

My husband had mentioned a name, but I didn't pay much attention at the time. Just getting everybody plus dog in the car was enough of a job without that. He also said that our host-to-be was a "cowboy poet" with a book. I didn't pay much attention there, either, as it seems that a lot of people have a book these days. We took the lake road and soon turned into the Busch compound, where all the heirs to beer hops live--at least when they alight for a while in their Templeton houses. Oh, Busch, Hadley, Hager: all that, I realized. This might be interesting. When I asked, Mike said the man's name was Drummond.

We took our dogs to a lake with a little stone house and an island. The golden rod and asters were blooming, and water was trickling over a lots of rocky drops and a stone dam. The dogs did some retrieving in the lake. Then we talked to Drummond and his girlfriend Rebecca as we tramped around the edge; he had designed the lake with an engineer, and we chatted and laughed about dogs and the making of the lake and children. 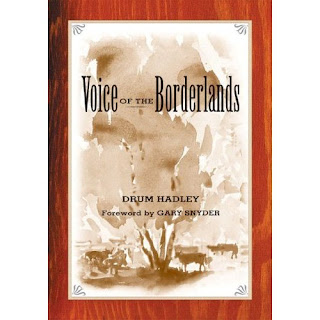 On the way back, one of those wonderful hair-on-end moments happened. We were strewn out along a shadowy path through the woods, and I paused to wait for my daughter. She had stopped at a lamppost--an interesting lantern crowning a shaggy wooden post. She looked very intent; she put her hand out and touched the bark.

Narnia, she said in a low voice and turned to look at me.

I won't forget that instant. Were her eyes shining? Was her face bright with realization? It seems to me so. For a moment the world felt charged with meaning, as if we had slipped into another realm.

At the house, we discovered a pixie bob, and so the younger children played with the cat while our eldest settled in to read a Patrick O'Brian novel. The rest of us wandered into the kitchen, where I noticed a book on the counter, Voice of the Borderlands. That was the cowboy poet's book, I supposed. picked it up and read, "Drum Hadley's work is absolutely fresh as a mountain stream. This book does honor to the ancient art of storytelling." 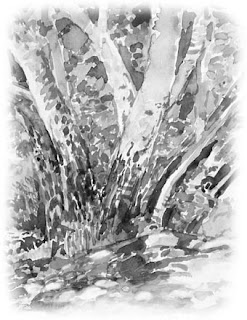 The wine in my glass gave a jiggle.

Our host was Drum Hadley.

Somehow I hadn't made the jump from "Drummond" and "poet" to "Drum Hadley." There was a quote from Jim Harrison on the jacket. At home, I had just been reading The Woman Lit by Fireflies.

I glanced at the Creeley and Snyder quotes and asked if he knew Ginsberg's editor, Gordon Ball, who used to be a neighbor of mine in Chapel Hill. I had seen him again in Cherry Valley a few years ago. And it turned out that Drum was the person responsible for getting that whole crew of writers to summer in Cherry Valley. I should have guessed! And his ranch in New Mexico-Arizona was neighbor to Jim Harrison's summer home . . .

And that was just the beginning of an evening of many surprises and stories, of much laughter and even a few sudden tears.


Nothing but empty blue sky.
Go gamble with the high rolling earth.
Haul those yearling cattle
To Sonny Shore’s Willcox Livestock Auction.
Pale, rumbling twilight in Old Mexico has fooled you.
Only heat lightning, and you,
And the cattle, and the dry grasses, and no rain.
Droughty cowboys, still looking towards that empty skyline,
Listening to a blown range song,
Cowboy hearts in the dust have always known.
Waiting here for the rain.
Then one day, you feel a new wind come,
Blow cool on the sweat of your sun-baked neck.
Smell that wetness sweeping past the blue mountain ranges,
The lightning cracking. As old Walter Ramsey says,
“Dry times are always thatta way.
When you think what you’ve waited for never will come,
That’s what it takes, to bring you the rain.”

Prayer for the Land


We are gathering these Borderlands together,
Mesas, arroyos, and valleys as far as our eyes can see,
Blue mountain range upon mountain ranger forever,
Turning towards dawnlight, then into the evening West,
As far as pale North sky circling South, to where vaqueros
Come crossing horseback by the broken mesas in Mexico.
There's a low light stretching from the sea of undulating cloud.
Sky streaked down to touch Earth from Heaven.
Who are you who cross through that dusk light before us?
Past old-growth juniper, cedar, and mescal,
Across this great sea of sky, Old Singer,
We hear your voice calling,
"Turn back towards me, come back to Earth."

from Drum Hadley's Voice of the Borderlands (Tucson: Rio Nuevo Publishers, 2005)
This long-postponed book is really four in one and runs to almost 400 pages; it has an introduction by Gary Snyder and watercolors by Andrew Rush.

Drum Hadley has lived and worked for forty years along the Mexico-New Mexico-Arizona border, first as a cowboy, then as a rancher. He is the author of three previous books of poetry. He founded the Animas Foundation, which supports sustainable agriculture in harmony with the environment. He is also a founding member of the Malpai Borderlands Group, a community-based ecosystem management project. Hadley lives in the Arizona-New Mexico borderlands. --from rionuevo.com

Postscript: I ran into Drum and Rebecca on Main Street last fall, just before he left Cooperstown for the ranch. He wasn't feeling so well but was up for a big hug and some talk. I thought maybe it was time to refurbish the little piece that I'd written about him, slap in some pictures, and remind people about a man's life work in words.

The pictures in this post were found on the web; the images of and from the book I chose to take from http://www.terrain.org/poetry/18/hadley.htm, because you can meet more of Drum's poems there. The photograph of a younger Drum on horseback is the work of Teresa Turner. The image below is drawn from Nathan F. Sayre's Working Wilderness: The Malpai Borderlands Group and the Future of the Western Range. 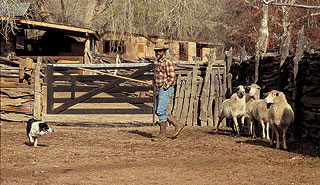