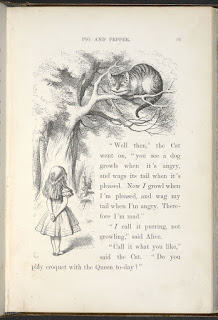 Last night several of my children were spending the night, and my daughter was cold in her room; I turned up the heat and about six in the morning had the most intricate writer's nightmare. I dreamed that I was young and in a class with John Gardner. (Why? The only person I know who has talked at length about what John Gardner meant to him as a teacher is Jeffrey Ford, so I don't know a lot about Gardner as a teacher other than what Jeff has said. And certainly not whether Gardner had an affinity to cats...)

We were to discuss a story called "Birthday." It seems we were at Brown, in a classroom in a nineteenth-century house. Gardner was seated behind a bullet-gray metal desk; he became threatening to the class as time passed, and kept opening the top right drawer in a way that made people uneasy. They seemed to feel that he might soon brandish a weapon. But I was sitting beside and oddly near the desk and kept craning to see what was inside. Neatly arranged boxes full of brightly colored pushpins, round-headed short pins, and other small shapes filled the drawer. It looked rather like some Modernist mosaic, but more complicated.

People began to get up and leave. Soon police surrounded the building. I was trying to comfort Gardner, who at some point (understandably so) transformed himself into a cat (a pleasant-looking Tenniel gray tiger) and curled up in what must have been the desire to protect himself from the world. I held him in my arms close to my face, and though he scratched at me several times in agitation, he did not attempt to flee away from me and hide. A single remaining classmate tried to call for help.

Noises came from below; perhaps some sort of rescue was beginning, but it made me strangely uneasy. I got up and began climbing upward through the house and took refuge on what I believe was the third floor, the cat still in my arms close to my face. I opened a closet and crept inside to lie down, my head and torso and the cat inside its shelter.

Robots were combing the house, spraying pesticide. The remaining classmate tried to call her mother on her cell phone, but could not get through. (Perhaps because there were no cell phones when Gardner was alive?) After a while, she lay down on the floor of the room and did not stir. The house was full of the stink of pesticide.

I told the cat a secret, that today was really and truly my birthday. Gardner-cat seemed quite interested and stirred and nosed at me, but of course he was a cat now, and not a talking Cheshire cat, so I was glad that he understood but knew that he could not tell me what moved in his mind.

A lady robot, also gun-metal gray but with shocking-pink eyes chartreuse neon hair, entered the room and began spraying the corners of the room. She rolled to the closet and began spraying the cat in my arms and me. Being a writer and a dreamer to boot, I was able to change my point of view to a more limited omniscient view and see the death of cat-Gardner and girl from above. A few classmates filtered into the building later on and announced (though ineffectually) their displeasure at what had happened. The room stank of cat piss. The girl and cat were still dead, but it was a sunny day without robots, though yellow tape and policemen were still outside.
Posted by Marly Youmans at 7:36 AM