Five days left to pre-order The Book of the Red King in hardcover or paperback from Phoenicia Publishing, nab a discount, and support the small press directly. (Hardcovers will only be available from the publisher; paperbacks will be available widely.)

Praise for THE BOOK OF THE RED KING

"Marly Youmans is brilliant, perhaps a genius. Her poems tell a story, offering us a vision of, well, I would say the Trinity, but that is only one possible interpretation. After a difficult and sometimes dangerous journey, a Red King, a Fool, and Precious Wentletrap converge into one, a resurrection that is heavenly. Is it true, or is it fable or fairytale? "When I want to write a new book," she has said, "I run across the land and leap off the edge of the known world." Her formal poems are impeccable and include sestinas, villanelles, rondels, rhyming schemes she may have invented, and perfect metrical patterns. Every poet can learn from this poet, and the reader—the reader will be spellbound."
--Kelly Cherry, poet, novelist, and former Poet Laureate of Virginia

"The Book of the Red King by Marly Youmans is an ambitious, magical book about the nature of power and language.  The Red King and the Fool, while they control different realms, make us consider whether it is better to rule on earth or in one’s imagination. In these gorgeous poems, Youmans makes the case for both.  Whatever side we take, Youmans reminds us of the paradox in each.  Even if we side with the Fool in this world of “hurt joy,” we are left with the realm of poetry.   It is not a bad trade.  For those who love well-formed poems and for those who love fantasy, this is a must-read and a distinctive, evocative voice. There is no one like Marly Youmans."
--Kim Bridgford, celebrated poet, editor, and director of the global conference, Poetry by the Sea
​
"Marly Youmans occupies an imaginative space that straddles both the present and the mythological past. It is the territory of Yeats and Tolkien, and Youmans shares not only a taste for primal imagery with these great poets, but also their love of rhyme, rhythm and sound."
--A. M. Juster, award-winning poet and translator

Clive Hicks-Jenkins was born in Newport, south Wales, in 1951. The early part of his career was as a choreographer and stage director. In the 1990s he turned away from theatre to concentrate on painting. He has been praised by critics in The Independent, Modern Painters and Art Review. Simon Callow has called him ‘one of the most individual and complete artists of our time' and Nicholas Usherwood in Galleries has described his work as ‘reflective, expressive painting of the highest order.’ 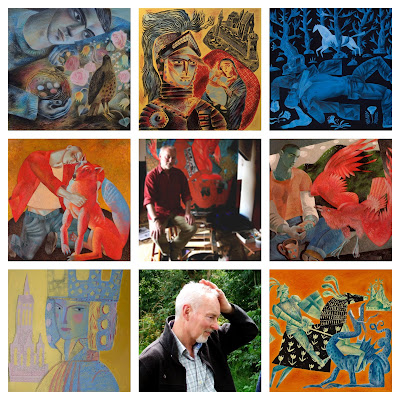 Posted by Marly Youmans at 9:51 AM