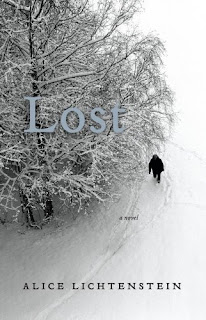 Alice Lichtenstein and Peg Leon and I are Oneonta-and-Cooperstown area writers who are fond of eating lunch. Together. So this is not by any means a review. Instead, it is a celebration of Alice's new novel. (Soon I'll do the same for Peg's new novel. Party confetti is floating about the lake and village these days.)

1. There's a lot about the work people do in Lost: what makes it meaningful or not, what goes on in laboratories or fieldwork, what goes on in the village world of firefighters and rescue workers and social workers and police. I notice this strain in the book because it's somewhat unusual, and I like it. Often in what is called "the literary novel," nobody seems to do any work, or else it is all happening at stage left. Here the work people do informs and expresses character.

2. A related element is Alice's use of class divisions and the way that terrible events can break the barriers between people and make them learn about others who had seemed from another world only hours before. (The people involved at the beginning are: an almost-mute boy who is seen only as an arsonist and a danger at school and on his grandparents' farm; an architect who has been transformed from what he was into an Alzheimer's patient; a scientist who is attempting to navigate her new life as caretaker of the husband who has permanently mislaid his reason; and a Vietnam vet who is losing family and a good deal of his mobility while attempting to make meaning through work that involves search-and-rescue of those who are physically or metaphorically lost. The strands of story bind Corey the unwanted and "lost" child to Susan Hunsinger, whose loss is clear and painful right from the start, and to Jeff, who is losing himself, bit by bit, and who suffers a major loss near the beginning of the book. Family is in tatters in each of the three parts of this novel, and family must be remade and bound together from unexpected materials after the characters pass through fire and ice. Whether that is possible is one of the questions the novel asks.)

3. This writer is very clear in her mind on what a novel is and what prose is, and her writing is as clean and sharp as the right tool used for the right job. Here's Susan in her lab with a student and a red-spotted newt: "Then she set to work, showing Jennifer how to slice a tiny trapdoor at the top of the skull, first scraping back and forth to score the bone, next finding the natural sutures to separate the places. 'Then it flops back like this.' Using the forcepts, Susan carefully lifted the bone, skin intact, up and back as though it were hinged. 'And here's the treasure.' Susan peered through the scope as the image of the salamander's brain, a white translucent globe, flooded the computer screen hooked up beside it. 'I think of it as a pearl.'"

4. She cares about craft and shapeliness, and that sort of meticulousness and concern for form shows. This book is the right length, trimmed of all fat and gracefully weaving threads of the past into the fabric of the present.

5. One thing that I consider a profoundly religious idea--the taking of the worst possible events and making of them the means of redemption and resurrection--underpins the story. This pattern strengthens and deepens the entire book. Was that a conscious design? Surely not. Instead, it was a writer plugging into one of the great mythic patterns of story. 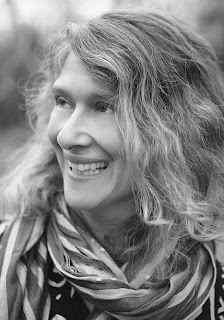 Posted by Marly Youmans at 9:00 AM