New books by friends, 2: "The Teaching of the Twelve," "A Syllable of Water" 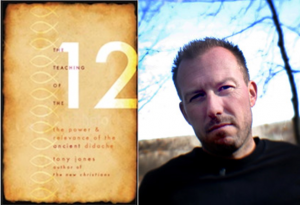 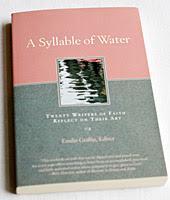 The Didache is a curious little document that reflects the workings of a young church innocent of the teachings of St. Paul and with its eye on right practice, and Tony Jones has mulled over this work and considered how it might relate to the house-church movement. His The Teaching of the 12: Believing and Practicing the Primitive Christianity of the Ancient Didache Community seems a well-researched—that is, a book based on scholarship and based on face-to-face examination of what the Didache can mean to a specific group of people who meet in homes and public spaces in small groups, seeking to return to the days and ways of the primitive church—investigation of the early Christian era.
*
The simplicity of the Didache is appealing: “There are two ways, one of life and one of death! And there is a great difference between the two ways. The way of life is this: First, you shall love God who made you. And second, love your neighbor as yourself, and do not do to another what you would not want done to you.” These words sound like the Shema, and there are other elements that sound like the Sermon on the Mount. But there is much in the Didache that’s a bit startling. “My child, don’t observe omens, since it leads to idolatry. Don’t be an enchanter, or an astrologer, or a purifier, or be willing to see or hear about these things . . .” The sections on the Eucharist don’t even mention the sacrifice of Christ but focus on the idea of the fruit of the vine of David and the gathering together of the church. The unforgiveable sin (always a special interest to a lover of Hawthorne!) proves to be this: that one judges a prophet who speaks in the Spirit. Visiting prophets who want to stay should have a craft and earn their bread. One is to fast as well as pray for one’s enemies, for injustice.
Some of the interest in all this is the way that Tony Jones imagines the community that might have used this and considers what is forbidden, setting it against established culture ways of Roman, Greek, and Jew—sex ways, marriage ways, child-rearing ways. An often-implicit contrast with our own culture ways is clear, as well as the reasons that the Missourians who call themselves the Cymbrogi long for the simplicity of practice, the simplicity of love that was a hallmark of the people who used the Didache.
While much of the Didache is straightforward and bent toward an apprenticeship in how to live, there are grace notes of beauty—the church is gathered from the four winds, the broken bread is scattered over the hills and brought together into one. Love is the rule of life.

Lil Copan of Paraclete sent me Tony’s new book; she also sent along a copy of A Syllable of Water: Twenty Writers of Faith Reflect on Their Art. I only know one of the writers in this book—Doris Betts, novelist and short story writer—and I am enjoying meeting the others, all members of the The Chrysostom Society. It’s one of those books to read slowly in ruminant fashion.
My favorite essay so far is by the poet Scott Cairns, whose poems I have enjoyed for some years. His contribution is “A Troubled and Troubling Mirror: On Poetry,” which I like very much for the somewhat self-indulgent reason that I see some of my own thoughts returned to me in fresh clothing stitched up by Scott Cairns. It would be a grand essay for any young poet to read, but I found it quite interesting even though I am no longer a young poet.
Here are a few of my favorite lines from Cairns:
1. Poems are, instead, about language, and about how language—when we learn to trust it—is able to operate as a way of knowing.
2. What a poem is finally about cannot be understood to have preceded the actual making of the poem.
3. …real art is, for the artist, far less referential than it is generative.
4. When we’re talking about poetry, however, success lies primarily in the opacity of the language, the ability of the words to draw attention to their own cobbled densities, and to invite the reader to encounter his or her own reflection in their surfaces.
5. The degree to which a fiction, an essay, a drama obtains the poetic is also the degree to which it is literary.
6. Also, a great many contemporary texts—posing as poems—are more correctly understood to be verse essays, verse anecdotes, verse declarations, verse gripes.
Aren’t those good? What a simple, clear definition of “the literary.” And how pleasing that a poem is regarded as a realm of experience—new, not recapitulated—and a place where the reader will have new experience and discoveries.
There is much more in the essay, and more in the others of A Syllable of Water. In Emilie Griffin’s words, “Our best experiences with literature and the arts are contemplative, a union of ourselves with the beauty before us.”
Posted by Marly Youmans at 5:11 PM

Email ThisBlogThis!Share to TwitterShare to FacebookShare to Pinterest
Labels: A Syllable of Water, Emilie Griffin, Scott Cairns, The Teaching of the 12, Tony Jones