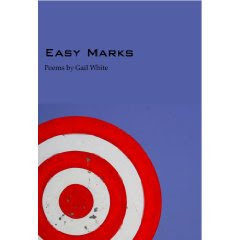 “Gail White claims a new authority for the woman light-verse writer: The right to assert herself as a satirist, as a clear-eyed critic of the world around her… Her poetic voice seems unusually tough, self-confident, and astringent.” —Julie Kane, author of Rhythm & Booze
Last month Gail White sent me her book Easy Marks (David Roberts Books, 2008); I know who Gail is because of the Formalista listserve for women who write formal poetry (http://www.sailpoet.com/FormalistaHomePage.htm.) That’s a fairly small group, but Gail also is an honorable member of an even smaller group: those who write comic and satiric poetry, who bind cleverness in numbers.
Having a fixed idea that the very happiest part of my childhood was the time when I lived in Gramercy and played with my Cajun neighbors and then in Baton Rouge, where I was taught by the adorable Mrs. Stringfellow, I have a soft spot in my heart for Louisianans. I also have soft spots for poetry that tells stories. And one for poets who use characters. And another for wild variety and comedy that restores the world and light verse that darkens and goes heavy...
Here's a little mini-anthology of Gail White's poems. If you read them and want more, head over to her website. And always remember, in what may be the most-often-remembered words of Kenneth Patchen, "People who say they love poetry and never buy any are a bunch of cheap sons-of-bitches.” It's good to remember that most books of poetry in these United States sell well below a thousand copies--often below a hundred copies--even though poems reward rereading and memorization in a way that a novel, say, simply can't. The publication the next book often depends on sales of the one prior. So if you like a poet's work, think about buying it.
BREAKING DOWN IN THE SOUTH
It knocked me over to learn there's no such thing
as a nervous breakdown. My aunts and uncles had them
all the time. It was spoken of in whispers,
like drink, divorce, or cancer. Aunt Leona
had a Nervous Breakdown back in '67
and never took communion again--she thought
the devil had her. Enviable Aunt Leona,
sure of her standing with the Lord and Satan.
Uncle Eugene got violent when he drank
and ended up in a Home. They never said
whose home it was. Some people who broke down
looked fine to me, but still the fame and glamour
of a Nervous Breakdown hung around their necks
like a name-brand diamond. Now, in middle age,
I'm told my dismal state is just depression,
Reactive, mild--here, try a little Prozac.
Damn it, I don't want drugs. I only want
to be eccentric, batty, somewhat daft,
covered by Aunt Leona's mental mist.
Again, my generation gets the shaft.
I'm due for a breakdown, and they don't exist.
As she comes to the end, hoping to ravel and have a bit of a mental lie-down, the poem absolutely refuses her and moves into the increased solidity of a quatrain.
*
One reason I like this one is that I had an uncle who, at 101, kept seeing pesky Georgia devils coming round. His Jamaican nurse chased them away, coaxed him into humor. There's nothing like deep South relatives... (For that matter, there's nothing like relatives.)
ROSSETTI'S WIFE
He wants his poems now, the ones he buried
with me, to be a sacrifice of love
forever. There you are, that's being married
to genius. That's what you're dreaming of,
you silly girls who think it was great luck
to rise from milliner to painter's model
to poet's wife. You marry and you're stuck.
Give me an artist for a man who'll coddle
himself. Oh, he's in love with his ideal
and thinks it's you, but it's his bag of tricks.
Even when I was dying he could feel
That I'd be perfect for his Beatrix.
And then? They're all alike, poet or hack:
He digs you up and grabs his verses back.
Dante and Dante...
Elizabeth Siddal, lover and finally wife and artist and poet, much under the thick and demanding shadow of Dante Gabriel Rossetti, has great fascination for both so-called literary and so-called genre writers. (I prefer not to do categories, but you know what I mean.) Dante's friends dug her up from the grave first and claimed that her red hair had grown wildly, but writers can't let her rest either--she's a fascinating figure.
I like this macabre twist on the tale, where Dante Gabriel Rossetti is already dreaming of his famous "Beata Beatrix" (with the figures of Dante and Beatrice in the background) well before Siddal's death.
SHADOW LOVE
Somewhere inside my mother's head
beyond the reach of conscious thought,
their lived the girl she might have had,
the charming daughter I was not.
*
My shadow sister would have had
beauty and common sense and taste.
Though I had brains, it was too sad
the way I let them run to waste.
My shadow stood beside the bed
moments before my mother died.
Looking beyond and through my head,
"Oh what a lovely girl," she sighed.
What a tight poem, full of reverberations! Here is a little hall of mirrors in which the narrator sees her mother, herself, and the imagined perfect daughter, while we see all these and, additionally, the last gasp of mother-love that can fuse the two daughters into one.
Posted by Marly Youmans at 5:16 PM