Val/Orson, coming in early May

"The spirit of the forest is alive in the beautiful writing of Marly Youmans' Val/Orson; a compelling legend of romance and mystery both ancient and modern at once." --Jeffrey Ford

"What a gorgeous tale! I'm always delighted to read a new work by Marly Youmans, and Val/Orson both enchants and satisfies: it is a combination of myth, Shakespeare, and modern environmentalism, with not a little magic thrown into the mixture, written in prose as lush as it is precise. A treat for anyone who loves fantasy or just a tale well told." --Theodora Goss

Jacketed hardcover limited edition (200) A handsome cloth edition signed by Marly Youmans and the writer of the introduction, Catherynne M. Valente, with jacket image by Clive Hicks-Jenkins and interior by novelist-designer Robert Wexler. Click on the image above to see the jacket in full. A larger run is the unjacketed limited edition (500) signed by Marly. 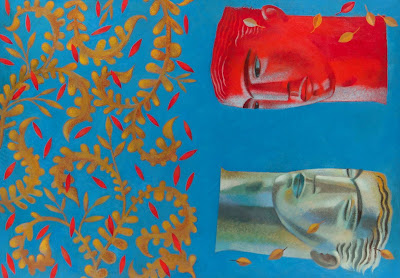 Through the dazzling double-story of a stolen twin and the secrets of an ancient forest, Youmans roams also among the sweet spirits of Shakespeare’s romance plays.

Val/Orson opens with Val long saddened at the loss of his stolen twin brother. He has grown up in the California forest, climbing mysterious redwoods and finding his greatest pleasure in a landscape that seems alive. And sorrow for his lost sibling—his double—haunts his walks.

From boyhood, he has worked with all his intelligence and strength to save the ancient trees. Now Val's world is increasingly populated by environmentalists, sometimes dangerously radical, sometimes merely idealistic, and further shaded in connection with the disappearance of a particularly bewitching tree-sitter--a woman who has both captivated and confused him.

“I fear seeing a luminous being crouched by the hearth, ready to swing its intense light-drenched gaze toward me. I fear that I’ll never grasp the terms of my own damnation or what happened to the woman I knew only by the name of Diamond . . .”

Did she die in her wanderings? Is she still in the deep forest with her lover, mocking Val? As he searches for his lost twin, he must find out.

The sequoia groves are the stage where a company of figures worthy of a Renaissance “winter’s tale” (Fergus, the Sherwood band of tree-sitters, grief-shaded Bella with her wild inheritance, Clere, and mysterious others who seem close by, half-hidden in trees) engage, entertain, and challenge Val. As their stories mesh and unwind, they lure Val deeper into the rich complexity of their narratives and toward revelation. And as the mystery in Marly Youmans’ magical world intensifies, Val moves from revelation to a stunning transformation as son, brother, lover, and steward of the wildwood.

I've enjoyed working with publisher Pete Crowther and editor Nick Gevers. I find that it's sweet to be asked for a manuscript and a pleasure to work with a smaller house. I recommend it!
Posted by Marly Youmans at 2:00 AM