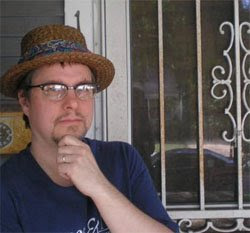 
Corey Mesler is a penpal of mine—met in the e-aether some time after he reviewed a book of mine for the Memphis Commercial Appeal—and so I want to pay some notice to the fact that he has published that most-ignored thing, a book of poems. FootHills Publishing has stitched up Some Identity Problems as an attractive book, generous in its profusion of poems.

You will never meet this amusing, charming poet and novelist on tour because he is agoraphobic and stays home in Memphis, but you can meet the joy, whimsy, love, anxiety, and contradiction in his poems. Many of these poems are modest in scale but have reach. As a whole they are kaleidoscopic—swerving from low to high in diction, playful, belated in feeling or elated, revealing a persona that struggles to find a center, meaning, worldview. He frolics in the realm of the absurd, then evinces a heart of ripped-open sincerity. He bumps from sacred to profane, leaping from monkey to man to deity. His favorite tropes involve repetition and variations on it, startling metaphor, and the yoking of opposites—a Barcalounger linked to mythic depths.

If you wish to buy a copy, the ideal place to buy is from the bookstore that Corey and his wife Cheryl run in Memphis—Burke’s Book Store, the oldest bookstore in Memphis, founded in 1875. That’s what I’m doing because I can support the book of poetry and bookstore at once. Mine is beautifully signed, so be sure and ask for an inscription!

Addendum:
If you'd like to ask Corey a question here, feel free!
I'll roust him for an answer.

The red book we keep high on a shelf
where children can’t reach.
The blue book is for those who won’t
read anything else. The black
book is where I write everything down,
the names of the children,
the reasons we keep the books, and the
way out, if that becomes necessary.

AN ORRERY FOR CHLOE

I will paint the paper sky
with pinpoints of light,
put a smile on the
waif-like moon.
I will walk with you onto
the sunbeams
that color our porch like
a prism exploding.
And, in the end, if the
wayward universe
will not bend to our every
wish, I will filibuster
god to give you all the
comforts of home,
on this rickety planet, even
as she speeds through
space on a collision course
with eternal profusion.

WHAT MOVES IS PAST

“A lonely moon is mirrored in the cold pool.
Down in the pool there is not really a moon…”
Hanshan

By remote water I have sat
thinking of this and that
and speaking names into
the water, as if there I would
receive back echo. Those
who no longer are near,
those who no longer care,
all those who took me into
themselves and then moved on,
I talk to the river about them.
The river itself is never still,
but it answers something in me
which is deep and almost beyond
recollection. It answers that those
names are now made of silence.

Yet another addition, October 30th: I took a peek at Corey's publisher, and feel that I have been remiss in neglecting to mention how interesting and industrious they appear. Poet and publisher Michael Czarnecki writes of the small company that "FootHills Publishing was formed in 1986 for the purpose of getting into print the words of poets who found it hard to get their work out to the public other than at readings or in the occasional magazine. The first few books were published in conjunction with Great Elm Press, operated by Walt Franklin. Since then, FootHills Publishing has released more than 250 chapbooks or books." The company has all the virtues and determination of a cottage industry: "I do the editorial work - Carolyn handles the book production and shipping and our two boys, Grayson (16) and Chapin (12), help with production. Grayson also assists with some design work. All of our books are now hand-stitched and we have received many compliments on the quality of the work, both in content and production." The picture of Corey's book below doesn't show the stitching, but it's quite evident and attractive when one sees a copy, as is the good quality of the materials. I looked them up and see that they are just barely west of the finger lakes, and probably got as much snow as we did yesterday... 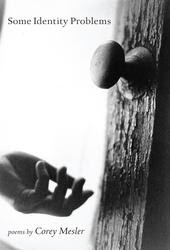 Posted by Marly Youmans at 2:00 AM